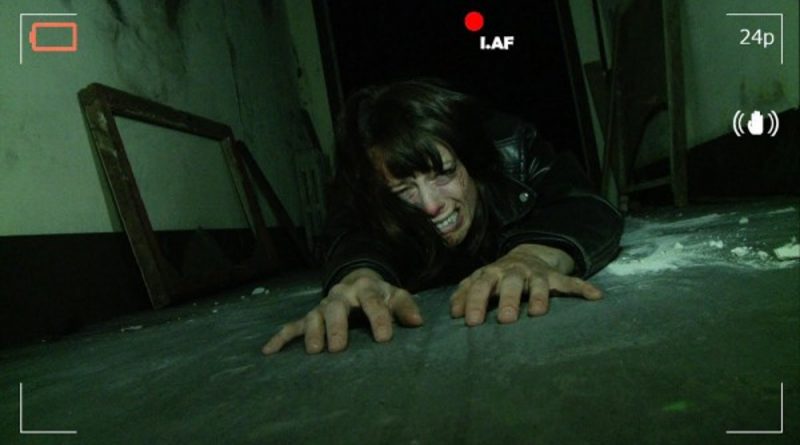 “On April 12th 1950 a young inmate was beaten to death in a Californian boy’s prison. The body was dumped in the institution’s graveyard. The murder was never solved… or even reported. Sometimes he comes back, for revenge.”

This opening statement to A Haunting at Preston Castle sums up the movie quite nicely. The story has been inspired by true events that occurred in the 1950s when house keeper Anna Corbin was bludgeoned to death and the suspect was an inmate of the boy’s prison. This building has been previously explored on paranormal shows Ghost Hunters and Ghost Adventures, which having some link to reality gives a viewer a sense of nervousness yet excitement from the get go.

The film centres on college student Liz (Firgens) who upon breaking up with her boyfriend meets up with her best friend Ashley (Tocquigny) and an old high school friend Danny (White) for some fun. The three head out to Preston Castle, an old building that used to be a boys prison and as dark approaches, things tend to go bump in the night. When Ashley wonders off to give Liz and Danny some alone time, she never makes her way back and as they go looking for her, something is watching them.

The location and setting are perfect and in keep with what you would expect from a paranormal infused film. There are plenty of high visual shots showing the scenery, tracking shots as the three approach Preston Castle and sneaky peeks as if being spied on by someone or something. The combination of professional shots and hand held footage by the actors gives lots of interior angels of the building. When the actors are then separated, this builds on the suspense quite dramatically. The lack of light in the building itself makes everything illuminated only by torches and phones. This means a viewer can only see what the actor would see in the moment, so anything could pop out at you at any moment and it does.

There are out the corner of your eye visuals that will play with your mind, things falling over by themselves, spooky shadows and noises, however with all the natural elements of a creepy old building, there were many more opportunities to make things even more frightful. Seeing bed springs bounce lightly could have elevated a heartbeat by having the bed slide (or be thrown) across the room.

The character of Danny is a strange one. At the start he is nervous about his reconnecting with Liz, but after a while he just seems suspicious; leaving his phone “accidently” in the car as they go inside just appeared a little odd. His reaction to seeing an apparition for the first time is also a little disappointing. Where most people would have screamed and headed for safety his response was “did you see that, that was a f*****g ghost, that was so crazy. Come on let’s get out of here” and he remains in the same spot. Likewise, Liz as an unbeliever in the paranormal hears moaning and shouts “there’s no such thing as ghosts, I don’t believe in them” and prays for help. She then sees a bright light that knocks her out and takes her away; this is enough to make anyone a believer in the paranormal.

Although A Haunting at Preston Castle lacks in the scare department and doesn’t really give any good jumps, it is the perfect Halloween night stay in and watch movie and the perfect viewing for any fan of Paranormal TV shows.

A Haunting at Preston Castle is released digitally and on DVD 26th October 2015, courtesy of TriCoast UK – just in time for Halloween!