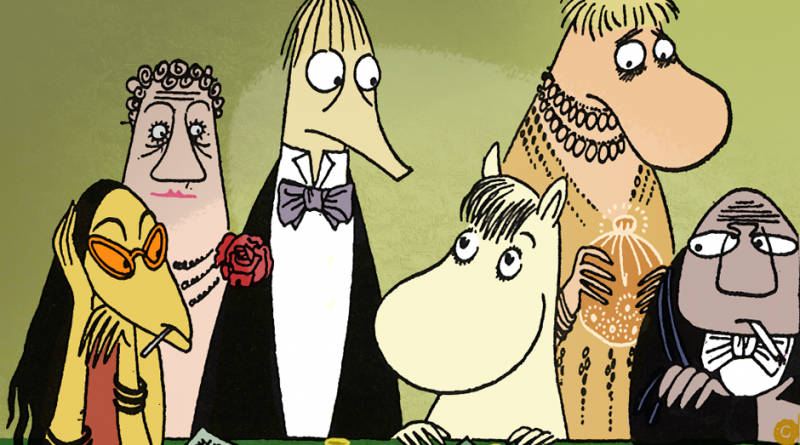 Moomins on the Riviera is a beautifully drawn and lovingly crafted tale based on a 1954 comic strip of the same name drawn by Tove Janssen and published in the Evening News. The film is a timeless and old fashioned fairy tale told in hand drawn cartoon form which sees the Moomins, supported by Snorkmaiden, Little My and others, on a continental adventure.
Odd and less odd things happen to the Moomins. Having stated that all he wants is to “live in peace, plant potatoes and dream”, Moominpappa’s head is swiftly turned by the sophistication he perceives on the Riviera. He is befriended by the aristocratic Marquis Mongagga and adopts the title ‘de Moomin’, much to the exasperation of Moominmamma. Snorkmaiden is similarly captivated, meeting her It-Girl idol Audrey Glamore and acquiring an unsuitable suitor, Clark Tresco, much to the confusion of Moomintroll.
Many escapades ensue and the foolishness, frailties and charm of the characters is clear but not mocked. The pretensions of Moomintroll, Snorkmaiden and some of the aristocrats and the puzzlement of their friends is handled with humour and, despite the simple story and peaceful pace, there is plenty of imaginative fun.

The story also looks fantastic with the subtly vivid and detailed drawings lending yet more charm to the already charm-laden tale. The land and landscape of the film fit the characters and scenarios and there are lots of loving little details in the drawings. Attention to detail is also important and all ends are tied up by the inevitable, but not dull happy ending.

The innocence, integrity and spirit of the Moomins ultimately triumphs and they return home with Moominpappa once more stating his deepest wish of being able to “live in peace, plant potatoes and dream,” forgetting the chaos he has largely caused and left behind.
Moomins on the Riviera is a ridiculously gentle tale, but there are moments of drama and much strangeness. There are pirates! And sharks! And storms! And a shipwreck! And a Duel! All of which prevent the extreme sweetness and gentleness of the tale from overwhelming the viewer. The inventiveness of the tale, the odd events and the vivid and detailed animation keep you, if not on the edge of your seat exactly, then definitely sitting up straight in it. 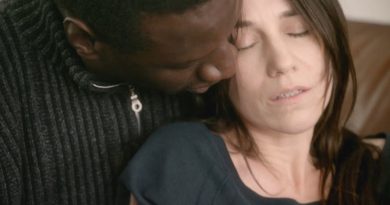