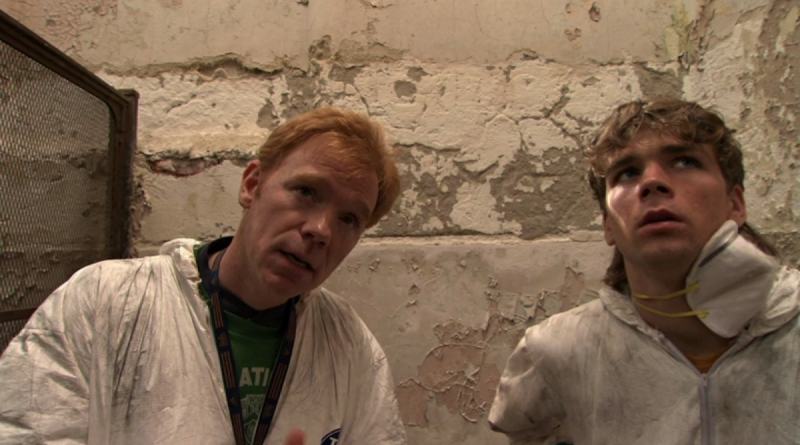 Spooky, real locations, the always watchable Mullan and Caruso and a compelling absence of special effects make this horror film something special.

Gordon (Mullan) wins a contract to remove hazardous materials from the abandoned Danvers State Mental Hospital. Him and his team have one week to clear the place. It’s going to be hard work, but they are chasing a bonus.

There’s an extra problem: the old asylum is a disturbing place. Gordon is clear that no one should be left there after dark; and that they use walkie talkies to communicate with each other.

When team member Mike (Gevedon, writer) discovers taped sessions with a dissociative identity disorder patient, the ghosts of the past come to threaten the contractors and their tenuous hold on the present.

Session 9 is a tense, creeping chiller from award-winning director Brad Anderson (The Machinist, Transsiberian), that’s earned a cult following since its original release in 2001. It now gets a limited edition Blu-ray release from Second Sight Films, with a bounty of extras.

I assume the film was made on a relatively small budget – and this works out really well, especially as tight framing gives a claustrophobic feel to proceedings, despite the distressed if grand institutional surroundings.

The real Danvers State Hospital is in many ways the star of the film. Just seeing the empty corridors and reception rooms in daylight has a deeply uncanny effect on a viewer.

The play-off between Mullan’s Gordon and his site manager (played by Caruso) also works well: their different types of acting capture their characters perfectly.

I was less enamoured of the plot device with the tapes but, I suppose, without something to drive the plot, the film would be a bunch of blokes walking around a derelict building.

Something was needed, sure. I just think that the on-screen procession through the session tapes is a bit clunky; and nowhere near as strong as the simple glimpse of Gordon making himself at home in one of the patient’s bedrooms.

The film comes with a slew of brilliant special features including brand new interviews, commentaries, documentaries, deleted scenes and an alternative ending.

The special features are:

Session 9 limited edition Blu-ray is out on 27 December.