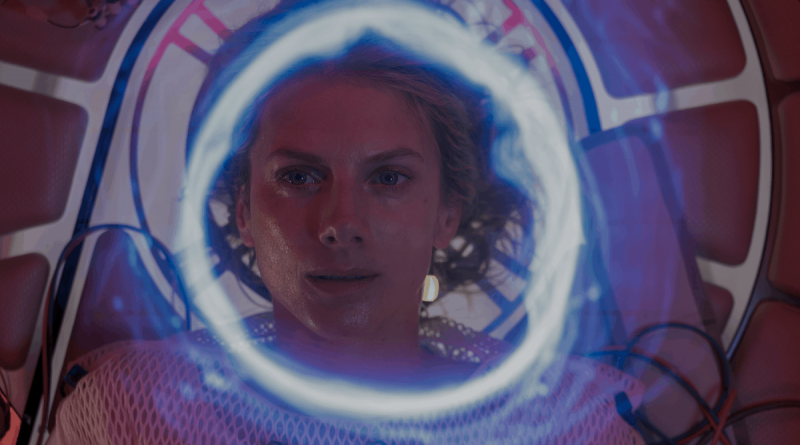 The “one actor /all the other characters are voices” type film is almost a genre of its own.   Think Ryan Reynolds in Buried and Tom Hardy in Locke.  Such films are great showcases for the actor but he or she has to be up to the job and fortunately Mélanie Laurent in Oxygen certainly is.

Like Buried, Oxygen takes place in single, claustrophobic location.  Scientist Liz Hansen (Laurent) abruptly wakes to find herself in an enclosed life support capsule – the sort used in cryogenics (the science of freezing a body until a cure has been found for what killed its owner).  She is covered in tubes and such and her only contact with the outside world is the voice of M.I.L.O, (Mathieu Amalric), the multi tasking computer that controls her environment.   She is fighting for breath and the calm and urbane tones of M.I.L.O inform her that she has only one hour’s worth of oxygen left.

Liz has no idea how she got into the pod or even at first who she is, but under her instructions the obliging M.I.L.O enables her to discover that she is an award winning cryogenics scientist, married to a man called Leo and she also recalls some sort of hospital emergency.  So is she in hospital?

The ever helpful M.I.L.O even provides a phone line (which like any contemporary phone line leaves her hanging on or cuts out abruptly at times), via which she speaks to an apparently helpful police officer, who promises his team are on their way to rescue her but seems to be taking one helluva long time about it.  And as Liz struggles to piece her life together and recall her memories, all the time the oxygen level is getting lower and lower.

Apart from brief glimpses of her previous life, Liz and the high tech pod are on screen for the film’s entire 100 minutes.  It does of course draw on sci fi ideas we’ve seen before – M.I.L.O. is like a sane version of 2001’s H.A.L. and the pod is somewhat reminiscent of the one in which Jake Gyllenhaal finds himself trapped in Source Code.  But director Alexandre Aja and writer Christie LeBlanc give the film a convincing life of its own and keep the tension going well.

Philosophically – and the best science fiction stories always have a philosophy behind them – it echoes that of another recent film, Apples – that our humanity is made up of our memories.

A word of warning – if you suffer claustrophobia or have a fear of rats (the rather cute white ones Liz uses in her laboratory memories) – this might not be for you.  In all other respects though, it is highly recommended.

Oxygen is available on Netflix from 12th May