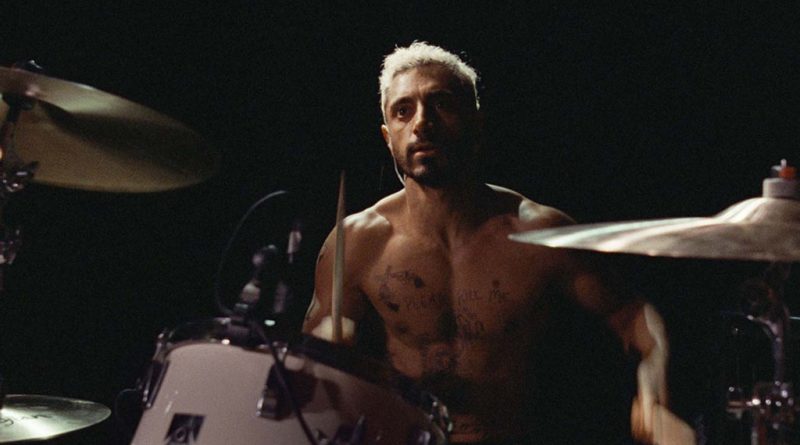 Riz Ahmed stars as Ruben, a musician/drummer touring America with his girlfriend Lou (Olivia Cooke) on vocals with their own particular brand of heavy metal rock.  And as we hear in the opening scenes, boy is it heavy.  Enough to bust your ear drums.

Which it does for poor Ruben, who alarmingly and suddenly suffers from severe hearing loss and shortly afterwards, total deafness.  The experts tell him nothing can be done apart from an expensive implant operation which may or may not work.  He is in effect condemned to a world of silence.

Via a friend Lou gets Ruben, who is a former drug addict and in danger in his distress of reverting to his addiction, into a facility for deaf drug addicts, run by Vietnam veteran Joe (Paul Raci), who lost his hearing in an explosion while on active service.  Joe’s facility is part of a wider community of deaf people, including children, whose philosophy is to accept and live with their deafness rather than regarding it as a disability.

Ahmed gives a remarkable performance, one to which he demonstrated great devotion in terms of research and living the role, spending much of the shoot with devices in his ears simulating deafness and learning the deaf sign language.  He and Olivia Cooke as his young and troubled girlfriend create a convincing intimacy between them.

Raci as Joe is disturbingly intense and his methods of dealing with both addiction and deafness are fascinating and sometimes a touch unsettling.

Another of the stars of the film is the sound mix, which for much of the film shares with us effectively and disconcertingly the aural experience that Ruben is undergoing.

And the resolution of the story, which features French actor Mathieu Amalric, is satisfyingly unexpected.