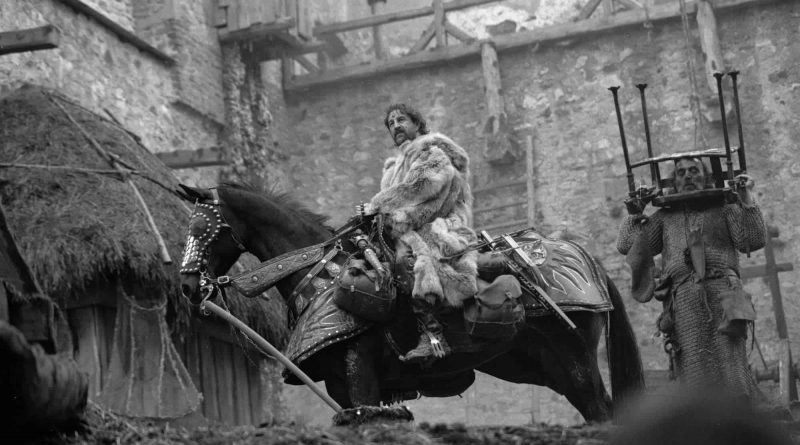 Hard to be a God is a black and white Russian sci-fi epic based the 1964 science-fiction novel by Arkady and Boris Strugatsky of the same name.

It takes place amid the rainy squalor of a parallel Earth’s Dark Ages, and follows closely behind Don Rumata (Leonid Yarmolnik), an Earth-born scientist who had come to the Brueghel painting-like planet of Arkanar years earlier, and is now being worshipped by the peasants as a deity

Let me paint a picture. A society built on a stinking bog, with a population of moronic Blackadder-like Baldrick’s revelling in their own filth. There is no real narrative, and even the translated Russian dialogue is tricky to grasp real meaning from. This leaves the viewer a prisoner in Hard to be a God‘s harrowing world Arkanar. Detailed, wet and profoundly miserable, life in Arkanar is torture in the literal sense, with severed limbs hanging off walls and ceilings, its thick livestock-like denizens clearly too stupid to ever pull themselves up from their situation.

Don Rumata has a mandate to not interfere with the cultural evolution of Arkanar’s citizens, but you get the sense that he couldn’t help them even if he wanted to.

Hard to be a God began shooting in the year 2000 and wasn’t completed until 2013. Despite it’s length it feels wholly deliberate and the product of a singular vision. The tightly framed camera work transports the viewer into the very heart of this purgatory. The characters that fill the screen often looking directly at the viewer, addressing our presence within the world with varying degrees of annoyance and ignorance.

Frankly, I have neither the intelligence nor necessary sense of context to properly comment on this film with the reverence it likely deserves. Regardless, I will offer my take while I bone up on the classics of Russian cinema (after this film humbled me into doing so). Its running time at an arse numbing 3 hours is the definition of an endurance test. The viewing began with interest, then confusion, horror, boredom, begrudging acquiescence at the tedium in front of me, and then finally interest again.

I left the screening room exhausted, thankful it was over and happy to escape to what was a sunny afternoon. Thinking about it on the train afterwards, maybe that was partially the point, as Hard to be a God ultimately left me feeling pretty grateful for the state of the world as it is. This was clearly a labour of love for now deceased director Aleksey German, who spent years toiling away in the editing room on his 6th and final film. It was close enough to completion to be credibly finished by his son after his passing.

A depressed Don Rumata plays a crude, downbeat melody on a basic horn instrument at both the beginning and end of the film, as if he’s desperate to incite a renaissance, of ideas, music and art that he knows will never come. Instead of culture we have rot, disease and endless, endless rivers of shit. Arkanar is a tuneless, joyless place of servitude and casual violence. The reason for the immense running time becomes clear, Hard to be a God is not a film, it’s a portal. It has zero interest in offering entertainment or even a story of any kind.

But instead German gives us something important, three hours in hell that helps us gain an appreciation of the beauty, colour, and cultural diversity of the world we’ve created for ourselves.