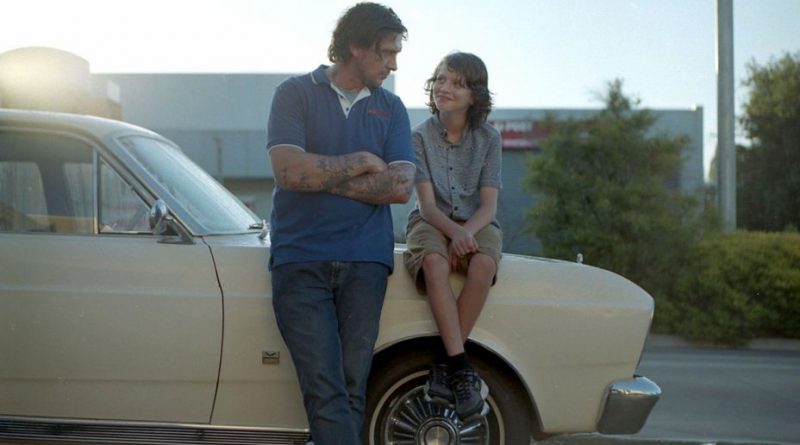 Following its World Premiere at the Venice Film Festival, director Jason Raftopoulos’ lyrical rumination on father-son relationships, WEST OF SUNSHINE, now arrives the other side of the pond from it’s native Australia for its UK Premiere at the East End Film Festival on 19th April.

Jimmy (Damian Hill) is a happy-go-lucky loser whose laid back attitude to life is challenged when he has to look after his son for one day during the school holidays. Alex (Ty Perham) isn’t keen – he’s clearly seen it all before – and mum (Faye Smythe) has her reservations – “Don’t let him play on your phone all day” – but Jimmy insists “It will be a good day. I promise.”

The only problem is, Jimmy’s promises don’t seem to be worth very much.

Forced to carry out his courier work in his own prized vintage car after Alex’s presence invalidates his work’s insurance, Jimmy has a bigger problem in trying to work out how to repay a loan shark later that day. His solution is a dead cert on a horse. “This money is for you, me and your mum”, he tells Alex, when the bet comes in, before jubilantly calling Banos (Tony Nikolakopoulos) to inform him he’s got his money – “I told you it’s gonna be alright mate.” Instead, Jimmy then goes for broke. A few bets later and he’s back to square one. Jimmy tries to persuade his workmate Steve (Arthur Angel) to lend him $1000 from his winnings – “I’ll give it you next week, I promise” – but he refuses, saying it’s already spent. He’s clearly heard it all before.

Increasingly desperate, Jimmy first tries to sell his beloved car, only to have a change of heart, tearing away to the cries of the confused salesman’s “We had a deal!” and then calling in on an ‘old friend’ (Kat Stewart), who deals drugs from her bakery. Yes, she can help him – if he does a few ‘jobs’ for her.

Suddenly, Jimmy is on a path that will put Alex’s life in danger, and all the time, Banos the loanshark is getting angrier and angrier…

Damian Hill has a lovely, lazy charm as Jimmy. People like him but are exasperated by him, including his own son. As Banos says: “It’s all my fault. I’m an idiot. I let you get away with it.” Jimmy lacks responsibility. His father abandoned them when he was around the same age as Alex, with only the car left to remember him by. Jimmy loves that car but, through the course of the day, will come to realise that it’s real thing, not what represents it, that matters.

The relationship between Jimmy and Alex is the heart and soul of the movie. Ty Perham is Hill’s real-life stepson which adds an extra dimension to the interplay between father and son. Perham is delightful as Alex; tetchy, moany, a typical tween absorbed by technology one minute, rubbernecking out the car window and finding joy in the fish, peppers, grain, sweets of the market the next. He so wants his dad to be the man who keeps his promises and their journey towards that is both prickly and poignant.

The episodic format of WEST OF SUNSHINE highlights the mundanity of everyday life that happens in between the endless ritual of the rising of the sun and its setting. And yet, in the process of it all, change happens. This oh-so-ordinary day, a down-at-heel father doing his daily chores with a disgruntled son in tow, takes on a mythical quality, drenched in nostalgic halcyon days sunlight, a timeless coming-of-age story, not just for Alex but for Jimmy too.

It’s a beautiful little tale that’s everything and nothing, a celebration of this strange little thing we call life and of the people who share it with us.