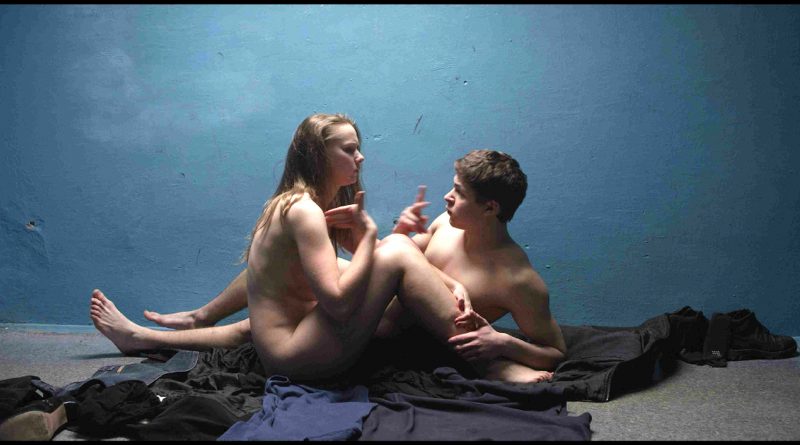 The Tribe arrives having been much heralded at film festivals, from its debut at Cannes last year through to its must-see status at the LFF. For critics who feel they’ve seen everything, Miroslav Slaboshpitsky’s tale of gang crime in a deaf boarding school, with all conversation conducted in Ukrainian sign language (no subtitles provided), proves that cinema can still surprise.

A Strangely Closed Off World

The film’s unfamiliar, strangely closed-off world is soon established. A young man arrives at a school where an assembly is taking place in almost complete silence, yet the crowd of children and teachers are animated. They shake their hands in the air in what one assumes to be a deaf alternative to clapping, but the only audible sounds are those ambient noises of the surrounding environment.

Following enrolment, the young man is directed to a classroom, in which the body language of his fellow pupils makes clear his outsider status. The other students’ cocky ease and disrespect towards both teacher and newcomer are wordlessly, yet richly conveyed; it’s a familiar scene of gestural braggadocio, but it’s also quite alien. Small details, such as a flashing light rather than a bell to end class, or, later, a cafeteria full of conversing people that hums only to the sound of clinking cutlery, make us aware of a different dynamic.

The plot is a straightforward institution-set gang-crime drama, with the young man gradually rising through the ranks, eventually advancing to the position of pimp for certain of the school’s girls. When he falls for one of his charges, however, he breaks the gang’s code and is shunned with violent consequences. Out of these elements, Slaboshpitsky crafts a harsh, gritty, tautly compelling drama.

The Tribe is never difficult to follow, even if some finer details are missed. Body language, performance, and an understanding of narrative convention all aid comprehension. Yet the world created is still the hermetic space of an isolated community, one with its own rules, both criminally and linguistically. As a non-signing audience we do not even learn the characters’ names. They literally have no voice for us, and yet there is a vibrant world of communication, with impassioned arguments, violent confrontations and rare scenes of tenderness.

Sense of Being an Outsider

The impressive camerawork reinforces our sense of being an outsider to this distinct collective. There are static shots, framing the group in doors or corridors, as well as long, flowing steadicam scenes that follow the youths as they roam the dilapidated school or bleak Kiev truck stops. The overriding sense is that of being an observer – following, involved, yet kept at a distance.

Our involvement is most pronounced when the tension is ratcheted up, occasionally erupting in brutal, vicious ways. In fact, some may find The Tribe‘s violence problematic, with particular scenes, such as a backstreet abortion, nearly unwatchable in their lingering gruesomeness. At times this relishing of nastiness feels exploitative, as it moves beyond any point of social realist comment.

It is worth considering, though, that the film’s focus on tension, sex and violence may greatly aid our understanding of the overall action. After all, they are universally recognisable foundations, requiring no specialist interpretation (an Eric Rohmer film conducted entirely in sign might struggle more heavily, for instance).

It takes real guts to make such an uncompromising picture, especially one set in a community so often ignored for their lack of voice (not to be confused with lack of language). The Tribe is a powerful, daring, fascinating film, both in its subject matter and in the viewing experience alike. It clearly represents an important and valuable step forward for the cinematic inclusion of the deaf, and is a tough, gripping drama in its own right.