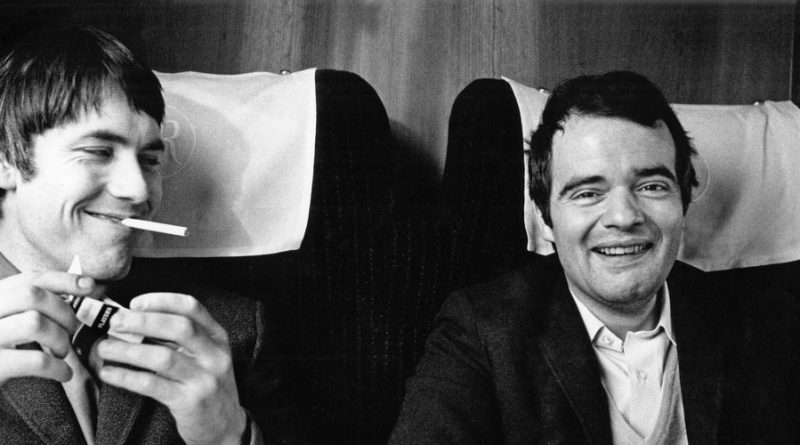 There’s nothing much in the names Lambert and Stamp to excite the ears – it sounds like a firm of accountants after all. But Kit Lambert and Chris Stamp were managers of The Who, steering the band from London pub gigs to acclaim as one of the best live acts in the world.

That journey owed more to bold improvisation than flinty-eyed planning, and it’s a strength of James D. Cooper’s film that this is laid bare through interviews with surviving band mates Daltrey and Townshend, and Chris Stamp shortly before his death in 2012.

Hope I Die Before I Get Old

The young Townshend’s famous line ‘hope I die before I get old’ has often been used as a stick to poke him since, but it captures the feeling of a band that didn’t expect to last and didn’t really want to, at least in the early days. It fuelled ferocious live performances that often ended in destruction and such hefty bills for replacement kit that touring became unprofitable. For years they played each gig as if it would be their last.

Some managers might have tried to impose more discipline when success came, but Lambert and Stamp had other ideas and the film is an engrossing record of where these came from and how they shaped the band’s development. Neither set out to be a music business manager, one of several ways they differ from contemporaries.

Some of these appropriated methods from organised crime, such as Don Arden, manager of the Small Faces, a self-styled ‘Mr Big’ whose negotiating tactics included threatening to throw a rival out of a fourth floor window. The Rolling Stones hitched themselves to Andrew Loog Oldham, a media-savvy young weasel who worked on publicity for Brian Epstein and went on to perfect a ‘bad news is good news’ formula later copied by Malcolm McLaren among others. In this rogue’s gallery The Beatles’ manager is the one you would trust most to give your granny a lift home without mishap. Epstein aside it’s difficult to imagine them as a success outside the music business.

By contrast, Lambert and Stamp already had promising careers in film when they stumbled on The Who, they were young assistant directors who met at Shepperton Studios and bonded over their interest in French New Wave cinema. They made unlikely collaborators. Kit Lambert was from an upper-crust arty background: his father Constant Lambert was a respected composer and young Kit counted William Walton and Margot Fonteyn among his godparents. After a typical establishment upbringing and Oxford University Lambert served as an army officer. He developed a taste for adventure that extended to his personal life: he was self-confident, often outrageous and openly gay, at least as openly as possible in a country where homosexuality was still illegal.

Chris Stamp could hardly have been more different: from a typical working class East End background, his father was a tugboat captain. At a time when ‘knowing your place’ in the social order was central to your sense of identity Stamp saw a different future for himself. He was encouraged by the example of his elder brother: Terence Stamp – along with flatmate Michael Caine – represented a new breed of actor with working class roots that brought an edgier presence to British screens. They formed part of an emerging London scene that ushered in a new social mobility in fashion, music and cinema. Keith Moon described the pair as ‘incongruous a team as The Who are’.

Between them Lambert and Stamp notched up credits in well regarded films including The Guns of Navarone, From Russia with Love, The L-Shaped Room, and Of Human Bondage. But they were bored, wanting to make a film about the London music scene when they discovered The Who – then performing as The High Numbers – at the Railway Hotel in Harrow. The film shows how they moved from shooting a film about The Who to managers of the band, bringing new ideas about their stage act and relationship to the audience that influenced Townshend in particular. It includes amusing recollections from fans that followed The Who in its early years, and from Stamp, Daltrey and Townshend on the inventive ways the managers found to keep the band afloat financially.

The film also examines the strains of keeping the band together when success arrived. The Who depended heavily on Townshend for ideas – there was no creative partnership as in The Beatles or the Stones – and we see how Lambert took on the role of collaborator, encouraging him to explore the ideas that produced Tommy.

Success brought other challenges: the bass and drums of Entwistle and Moon were widely admired, and hotshot Yardbirds guitarists Jeff Beck and Jimmy Page tried to poach them for a planned supergroup that eventually morphed into Led Zeppelin. Lambert and Stamp’s taste for improvisation could also dissipate their energies. Like everyone else they were stunned by Jimi Hendrix when the guitarist arrived in London in 1966. They touted for roles as his manager or producer, and on seeing both offers rejected set up a record label Track Records, just so they could sign him. The label turned out a success, notching up a string of number one singles with various artists, which must have rankled a little with Townshend, who had yet to achieve the same with The Who.

From there we follow the path downward through drink and drug problems to a seemingly inevitable outcome: the partnership dissolved at a meeting held – ironically enough – in Shepperton Studios. The film gets a little bogged down in the demise of the business relationship, but this is more than made up by its open exploration of the turbulent emotional dynamics between them all. Townshend has always been unafraid to wear his heart on his sleeve, and Stamp subsequently built a career as a counsellor. ‘It’s difficult to know the moments you love someone,’ he reflects at one point.

There is plenty here for fans of the band or music of the period. Viewers expecting lengthy live footage may be a little disappointed: this is more talking heads than exploding drum kits. But happily there’s plenty of that to be had in other films such as The Kids Are Alright.