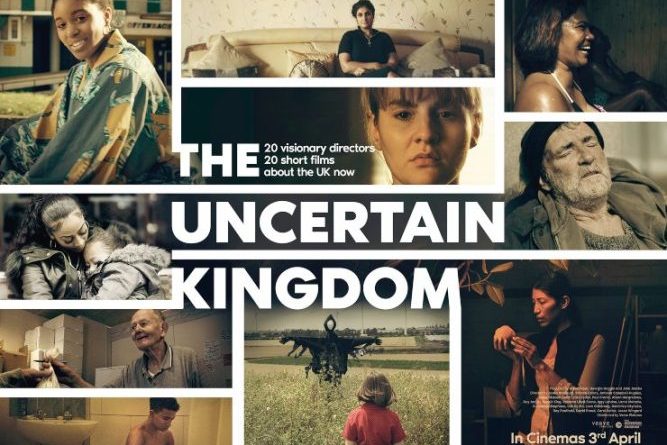 This wide ranging and adventurous collection of twenty short films was initially intended as a response to the uncertainty of the post Brexit world.  Then the coronavirus pandemic not only caused the cancellation of the collections’ cinema release but made our kingdom and indeed the world itself even more uncertain.

The three young producers behind the project were motivated by the situation of film makers, who itch to respond quickly to the times but are frustrated by the length of time it takes to set up a feature film.  So John Jencks, Isabel Freer and Georgia Goggin offered a mixture of established and new film makers £10,000 each to make a short film responding to today’s world.

The films are a mixture of fiction, documentary, even a dance piece – Lanre Malaolu’s The Conversation, which examines through movement the feelings of people of colour about dating white people – and an animation – Dominika Ozunska’s We Are Not The Problem – a day in the life of a Polish migrant in the UK.

One of the most powerful pieces, Jason Wingard’s Pavement, features Steve Evets as a homeless man sitting outside a bank’s corporate headquarters, ignored by all except for one appalled but powerless woman (Liz White) as he gradually sinks unacknowledged into the ground.   David Proud’s Verisimilitude is an acid comedy about a wheelchair user actress (Ruth Madeley) coaching a conceited non-disabled actor (Laurie Davidson) on how to play a disabled person, when she could play the role better herself. Paul Frankl’s The Life Tree is a magic realism allegory about the effects of plastic pollution, while Guy Jenkins’ Death Meets Lisolette is a whimsical comedy about the imprisonment of Death (Hugh Dennis) with Jenkins’s comedy writing partner Andy Hamilton as an out of work undertaker.

On the documentary side one of the most powerful pieces is Ellen Evans’ Motherland, dealing with the destroyed lives of members of the Windrush generation deported  to their West Indies “homeland”, while Carol Salter takes her camera to a food bank in the North West of England in Left Coast, as she records spirit lifting acts of kindness and sympathy in the face of glaring poverty – the only film in the collection which could be said to have a direct relevance to the since developed pandemic crisis.

This mini festival of short films is now being released in two volumes on multi platforms – see below.   The film’s producers are also hoping that, once we are allowed to gather in groups again, they will be able to mount the community screenings across the country that were planned for the film’s initial release.

The Uncertain Kingdom Volumes I and 2 is available from 1st June on multiple platforms including Curzon Home Cinema, BFI Player & iTunes.