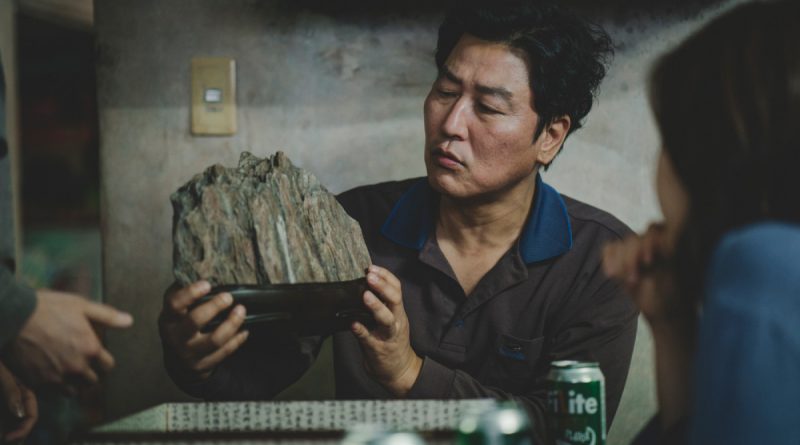 PARASITE has already won lots of awards. Does it deserve them? Decidedly yes. A film in Korean with unknown (to a European audience) actor, dealing with upper and lower classes in Seoul. So, what is so appealing about this?

Just to say it is one of the most brilliant films I have seen in a long time. Director Bong Joon Ho has crafted a film so intricately that each piece fits together into a magnificent whole.

The Kim family live in squalor in the basement of a house in Seoul. Although the family work at folding boxes for pizzas, they earn almost nothing between them. They hold their mobile phones up at the ceiling to get on to the WiFi of the people above and suffer from men urinating in the street above them. When the teenage son, Ki-woo (Choi Woo Shik), gets the opportunity to tutor Da-hye (Jung Ziso), the daughter of the very wealthy Park family, their luck begins to change. Soon Ki-woo is introducing the other members of his family into the Park family’s employment. His father, Kim Ki-woo (Choi Woo Shik) as chauffeur for Mr Park, his sister (Park So Dam) as the art tutor for the young Park family son and his mother (Chang Hyae Jin) as the new housekeeper. Ki-woo pretends they are acquaintances. Mr Park (Lee Sun Kuen) is a businessman and out all day, so his rather naïve wife (Cho Yeo Jeung) is left to run the household. This is the main part of the story, but then the film develops in quite unsuspected ways to include the story of the sacked housekeeper, Moongwang (Lee Jung Eun). What starts out as a distinct comedy, becomes a thriller with a very exciting finale.

Bong has constructed his film meticulously with the dialogue (albeit in Korean with English subtitles) expressing the individual views of the two families and always moving the narrative forward. Visually it is stunning too, with contrasting designs of the rich and poor living quarters. It’s a unique concept, juxtaposing wealth and poverty. Acting by the cast is of a uniformly high standard and deserves its own award for ensemble acting.

I originally wrote, “the film should get awards for the director and some of the actors.” So far the film  has become the first South Korean film to win the Palme d’Or at the Cannes Film Festival. It also won the Golden Globe Award for Best Foreign Language Film and the BAFTA Award for Best Film Not in the English Language, and became the first non-English-language film to win the Screen Actors Guild Award for Outstanding Performance by a Cast in a Motion Picture.

The film seems to have everything – relationship, class divide, wealth divide, humour and violence. Alongside the highlighting of social issues, the film is constantly entertaining. It would certainly benefit from more than one visit.

Parasite is available from Monday 1st June on all VOD platforms to rent or buy.  Also available in DVD and Blue-Ray