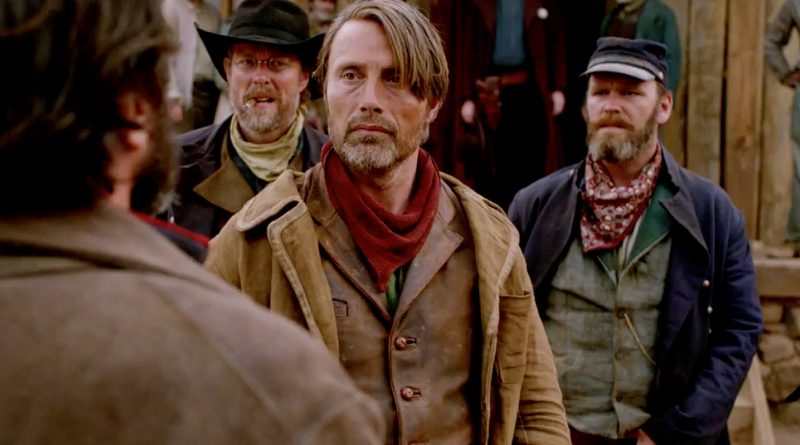 The Salvation is set in the 1870s among pioneering new settlers and outlaws in the Old West. The landscapes are big and the hardships ring of hate and the story makes a solid old school Western revenge thriller.

Mikkelsen (Casino Royale) plays an ex-pat Danish soldier called Jon who has brought his wife and son from the old country to live with him on his farm. On the stagecoach to the farm they are joined by a drunken outlaw and his sidekick. All hell breaks loose when the drunk makes a pass at Jon’s gorgeous wife.

The drunk just happens to be a sadistic gang leader and when Jon’s cowardly fellow townspeople betray him, he’s on his own hunting the baddies down. A nasty and tense tale of revenge follows as Mikkelsen fights dirty to keep the town clean.

It’s a solid thriller of fairly standard traditional Western stuff. (I was waiting for John Wayne to pop up and tilt his hat and offer an extra gun.)

The visually stunning look of the film with its lush score and crisp colours makes it look like a model Western that’s had a makeover.

An interesting modern take on the traditional Western, see it for Mikkelsen’s on-screen presence and Green’s extraordinary role as a mute Native American with a fierce warrior spirit.