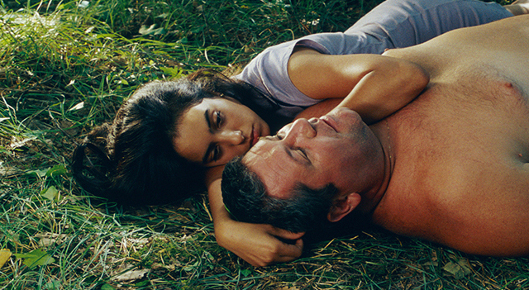 Oh Armand, you almost can’t help feeling sorry for our lovable protagonist in this series of unfortunate events. The King of Escape is a warm, funny, random story of a man named Armand and his quest for happiness. Just a regular homosexual Joe, living his life as a salesman, trying to do the right thing.

Living in a rural French town, at 43 you’d think he would have maybe settled down to the quiet life, but no, he is a hot-spot cruising, marriage-breaking (unknowingly) lothario of sorts with a good grasp of his type and sexual orientation. Until he stumbles across 16-year-old damsel in distress Curly, who he rescues and subsequently falls for.

Luckily the law in France permits sexual encounters from 16, but it isn’t just her parents who attempt to intrude on the budding romance from the bisexual Don Juan: the law, friends and expectant lovers are also thrown in to the mix. This film is a joyful, unlikely story with a twist.

Berthilot is perfectly cast as Armand; he is soft and gentle like an unlikely hero but strong in his conviction. His partner in crime is a drug taking sex fiend who you hope will become the man of Armand’s dreams so that they live happily ever after. I won’t reveal whether that happy ending actually occurs here. The damsel, Curly (Herzi), really pulls together a brave performance, what with all the looking bewildered, running and nudity; her character is played to perfection and even the sound of her teenage whining is authentic. Supporting roles, including that of Francois Clavier as the investigative police officer bring some unexpected comic relief.

There are of course a multitude of prolonged awkward silences, signature moves for a piece of French cinema: birds chirp, cars drive past off-screen, even the mooing of a cow; but this all adds to the hot, sticky, laid-back rural summer ambiance of the film. There is deadpan comical dialogue aplenty, and it comes across as very natural, almost naïve. Because The King of Escape is set in an authentic rural town, there’s also lovely scenery and plenty of woodland for all the illegal and frowned-upon activities that fill the film.

The thoroughly enjoyable story of a man on a mid-life journey, The King of Escape sees its hero on a quest through sex, drugs and awkward scenes of running through the woods, to who knows what? It’s enormous fun, with many a laugh out loud factor. A great addition to the ones to watch list. I finished viewing and went about my night with a smile on my face, mainly due to a closing line that’s to die for.

The King of Escape is out now on DVD and digital download.