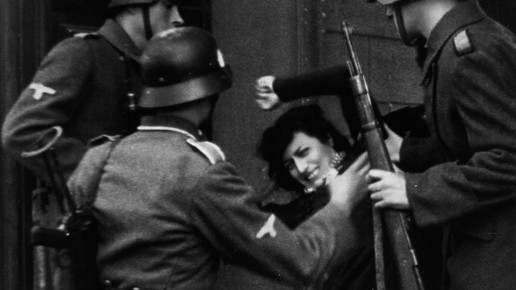 Rome, Open City; Paisà; Germany Year Zero – The War Trilogy, a Limited Numbered Edition box set released by the BFI on 30 March, brings together for the first time on Blu-ray Roberto Rossellini’s celebrated trilogy of films made during and immediately after World War 2.

These three films are very famous indeed – often hailed as opening salvoes of the ill-defined Italian neo-realism – but they are much more striking in certain sequences than in others. As a trilogy, all they really share is authentic, bomb-ravaged locations.

Rome, Open City – often cited as one of the greatest films ever made – was conceived in August 1944, as a face-saving propaganda piece for the Italian government, in a period when, despite their suffering a Nazi occupation in 1943 and 1944, many people across war-torn Europe considered Italians to be Fascist collaborators with the Nazis. As with the subsequent Paisà, Rome, Open City focuses on the efforts of Italian partisans; in Rome … there is a pretty fictional/ wishful reconciliation between Communist and Catholic partisans.

Despite its reputation for ‘realism’, the first thing you notice is the studio setting of much of the drama – and the obviously professional actors. The studio scenes deploy a very ‘noirish’, expressionistic lighting scheme and the camp Nazi villain is stuck somewhere between Vaudeville and Grand Guignol.

But it can be argued that these ‘artificed’ scenes supply a symbolic intensity that contrasts nicely with the impressive ‘reality effect’ of the grainier, real location-based sequences – which are paradoxically the most iconic scenes in the film: the street shooting of Magnani’s character and the climactic execution of the priest.

I can’t really buy the argument that Rossellini’s simplified mise en scene in the studio sequences is as impressive as these iconic outdoor location scenes, with rubble and dire poverty much in evidence, even if they are carefully staged too.

The individual DVD release of Rome, Open City features Children of Open City, a 50-minute documentary made for the 60th anniversary of the film.
Roberto Rossellini’s ambitious follow-up Paisà is constructed as a series of six encounters between Italian and American GIs, which take place during the liberation of Italy as the GIs advance through the country.

The intention behind the production was to give Italians a pride of sorts after their defeat as Fascists, occupation by the Germans and liberation by the Americans. Given this intention, it is rather odd that each story has a depressing outcome, as the Italian characters are routinely humiliated by their encounters with Americans. But perhaps these outcomes betoken a victory of sorts for Italians in general.

Paisà contains more quasi-spontaneous shooting on location than the first film; and the elliptical, episodic nature of the narrative is effective at suggesting the chaos of ongoing war and the material and moral grittiness of life in Italy in 1944 and 1945. Three of the stories involve partisans. Three stories are outstanding because of their brilliant use of real locations: the historical centre of Florence, the reed beds of the Po Delta, the bombed-to-rubble docks at Naples. The studio-set melodrama of the Roman story is also highly affecting.

Paisà is also available for the first time on individual DVD, with Into the Future, a 30 minute visual essay on the War Trilogy by film scholar Tag Gallagher.

Germany Year Zero tells the story of 12-year old Edmund, living in a crowded apartment block in war-torn Berlin. He tries to support his family, which includes an ailing father and a veteran brother, but spends much of his time wandering around the ruined city.

Germany Year Zero is the most consistently toned of the three films, despite being a rather over-scripted melodrama for much of its brief running time; with the characters guilt tripping each other about their Nazi pasts in a fashion which must have seemed like wishful thinking even to Rossellini and his scriptwriters.

It is filmed in a mix of Berlin locations and Rome studio spaces but this for me isn’t as noticeable as the similar mix in Rome … Also, much can be forgiven a film that has a last five minutes as great as this – the ending must rank amongst the most affecting in all cinema.

Edmund’s long, silent, brooding walk among the ruins with the camera tracking him by his side seems like a slice of cinema from the future, in which the social aspects of existence are sidelined, and the characters’ environment becomes the site of an individual, existential conflict.

The War Trilogy, a Limited Numbered Edition box set released by the BFI on 30 March, brings together for the first time on Blu-ray Roberto Rossellini’s celebrated trilogy of films made during and immediately after the World War 2.

Rome, Open City, Paisà and Germany Year Zero will also be released individually on DVD on the same date.