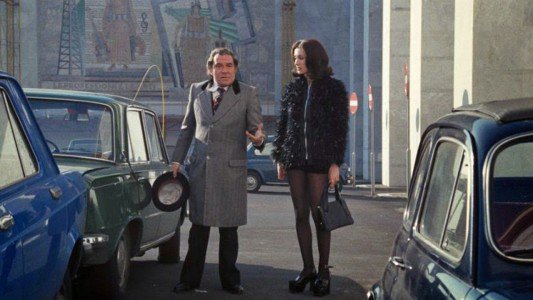 With frenetic pacing and glossy colours, Property is No Longer a Theft looks like an exuberant comedy crime caper. When in fact it is an obliquely developed social satire and anti-capitalist diatribe, which suggests that the criminal elements of the lumpen proletariat will kickstart the next revolution.

Total (Flavio Bucci) is an underpaid young bank cashier in Rome. Money makes him itch: he hates it, but he is obsessed by it. Just as he is obsessed by those who have lots of money and the power that comes with it. Such as his bank’s favourite customer, a successful butcher (Ugo Tognazzi).

After being turned down by his boss for a bank loan much smaller than the one just offered to The Butcher, Total resigns and embarks on a life of thievery, taking The Butcher as both victim and mentor. Because, of course, the successful businessman is the biggest thief of them all.

In Petri’s exploration of the libidinal economy of consumer capitalism, Total starts by stealing ‘fetish’ objects associated with the business man: his knife, his car, his mistress, Anita – strikingly played by Daria Nicolodi. But eventually, ‘all that is solid melts into air’ and objects are replaced by hard cash and the abstract value they represent. And thief and capitalist start an uneasy collaboration against the forces of law and order, in the shape of the detective investigating Total’s crimes and The Butcher’s subsequent insurance fraud.

Petri tells his stories in an oblique and mannered way that will irritate some people but Property is No Longer a Theft has a unique message and some powerful and disturbing imagery. The camera often tracks in close up across interiors which is disorienting, but that disorientation seems appropriate. The main characters talk straight to camera introducing their role in capitalist society; but this isn’t Godard, it is humorous political satire and allegory. The most disturbing of these monologues is Anita’s as it highlights the sexualised extreme of the commodification of people as things.

Extras include interviews with cast and crew. A video essay about Elio Petri and his oddball politicised cinema would have been nice but maybe that is coming with further releases from Arrow Academy?

Property is No Longer a Theft is out in a dual format edition on 20 March 2017. 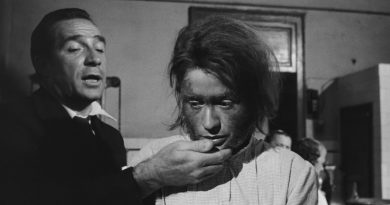