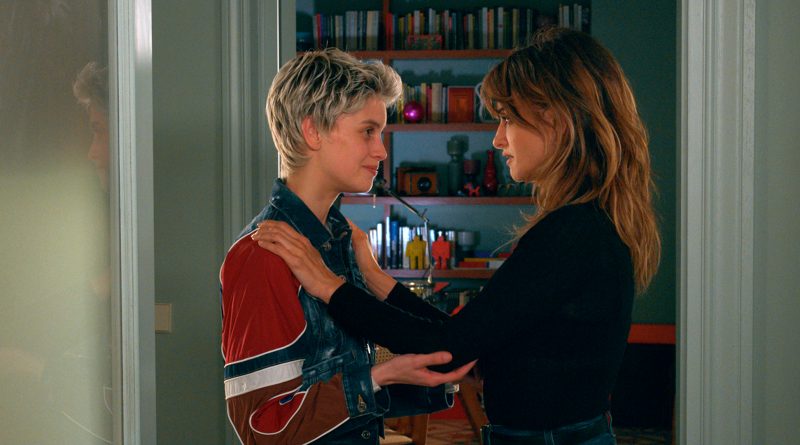 The parallel mothers of the title are two single women who find themselves accidentally pregnant and who meet when they share a room in the maternity hospital.

Janis (Penelope Cruz) is in her late thirties and welcomes this unexpected opportunity to experience maternity before Nature slams the gate shut.  Teenager Ana (Milena Smit) is however terrified and traumatised by the whole business.  The elder woman tries to reassure the younger as they go through the birth experience pretty much at the same time and then exchange phone numbers.

They don’t meet again however until several months later, when Janis is planning to go back to work and bumps into Ana at a local café.  Learning that Ana’s baby has sadly died, Janis hires her to look after her own daughter.

But Janis is beginning to suspect that little Cecilia isn’t her biological child – and from then on in the plot thickens with a number of twists and turns, some of which you might guess, others which will be totally unexpected.

Writer/director Pedro Almodóvar is known for creating strong and complex roles for women and here he has done it again.  Janis is an independent, modern woman with a career as a magazine photographer.  And Cruz, a long time collaborator of Almodóvar and arguably Spain’s best known contemporary actress, gives a predictably, well realised performance.  Now in her mid forties, she is still exquisitely beautiful.

Newcomer Smit plays Ana as touchingly vulnerable but with an inner strength.  There’s also an effective performance from Aitana Sánchez Gijon as Teresa, Ana’s unmaternal mother, who abandoned her baby daughter to be raised by her father. while she concentrated on her career as an actress.

There is though another important theme to the film, which is introduced at the beginning and is implicit in Janis’s story.  Janis first meets her lover and the father of her child when she photographs him for a magazine.  Arturo (Israel Elejalde) is a forensic anthropologist, involved in the exhumation of the mass graves of those murdered by Franco’s troops in the Spanish civil war in the thirties.   Janis, whose father abandoned her hippie mother, was raised by her grandmother and great grandmother.   The remains of the menfolk of the family are in one of those graves and Janis wants Arturo to organise the exhumation of that grave, so the women of her family can bury their dead with honour.

The result is a complex story interweaving maternal love, history and DNA, which cleverly embraces the horror of the mass graves through the very human story of the two women.   It is also beautifully shot by veteran cinematographer José Luis Alcaine.   The story may often be somewhat dark but the light is gorgeous.

Own Pedro Almodóvar’s BAFTA and Oscar Nominated PARALLEL MOTHERS on Digital Download now and available on Blu-Ray, DVD and Video on Demand from 16th May