This documentary is not quite as entertaining as my favourite Michel documentary Tea with the Dames, which featured Judi Dench, Maggie Smith, Eileen Atkins and Joan Plowwright reminiscing but it comes close.  It is also an appropriate last film from the late director whose lifetime (1956 to 2022) almost but not quite spanned the Queen’s reign so far – he was born four years after she ascended the throne

The film is a brisk and witty review of the reign of Queen Elizabeth II in 90 minutes, composed of linked montages of clips, under headings ranging from the Queen’s speech to Parliament to that anno horribilis.

We start with an amusing sequence which compares backstage in the theatre to backstage at a royal event – moments such HM in her finery peering over the bannisters to see who has so far arrived for dinner at a state event and probably checking out what they are wearing.  There are montages of the many bouquets accepted and hands shaken, which almost exhaust the nose and the hand.   A parade of the many cultures the queen has sampled and admired on goodness knows how many visits to the countries of the Commonwealth.   And a young Lenny Henry is seen at the Royal Variety Performance managing to get a mention of HM and his mum into the same sentence.

The film is a walk down memory lane for all generations.  For most of us, the Queen has been Queen for all our lives, an image on a postage stamp, a constant figure on the telly.   For some the footage of her as a young woman and indeed as a child will seem like that of a different person, while at the same time the contrast between the young queen and the elderly monarch reminds us all of the passing of the years.

At times the story is touching and poignant.  The elderly queen talks about the literal weight of the crown – lean forward and it could break your neck.   We see that crown being placed on the then 27 year old queen’s head at her coronation and she looks so delicate we fear it might almost do that.   Particularly poignant is the footage of the young Elizabeth with her beloved father, the late George VI.   Also striking is the contrast between the dignity of the grieving crowds in London as the king’s funeral procession passes and the hysteria and venom of the public anger forty five years later because the royal family are absent from their hysterical demonstrations of grief over the death of the Princess of Wales.

As the last film that Roger Michell directed this is a fitting tribute to the British monarch who was in place for his entire life and a record of times that were constantly  a-changing and indeed still are. 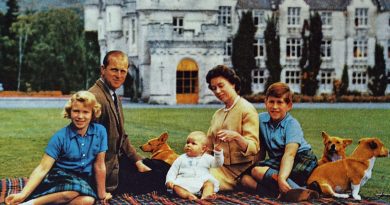 Elizabeth: A Portrait in Parts