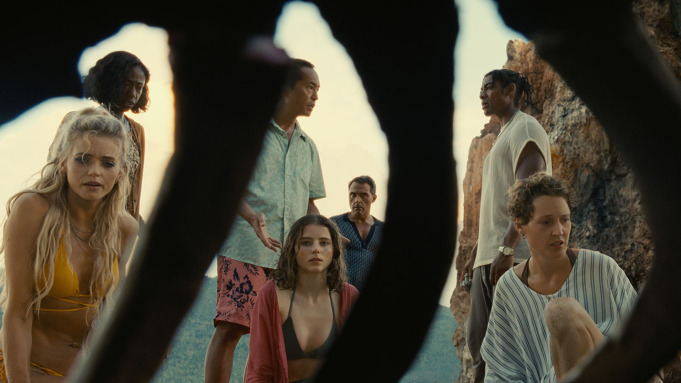 Back in 1999 director M. Night Shyamalan made a brilliant movie called The Sixth Sense in which Bruce Willis played a child psychiatrist treating a small boy who could “see dead people”.  I’ve been hoping for him to come up with something as good ever since.  Old is not it.

Based on a graphic novel Sandcastle, the premise of Old is both intriguing and promising.  A group of people on holiday are trapped on a secluded tropical beach and discover that they are ageing rapidly – a whole lifetime in a single day.

The unfortunate holiday makers are nuclear family Guy (Gael García Bernal) and Prisca (Vicky Krieps), whose marriage is on the rocks and their children Trent (Nolan River) and Maddox (Alexa Swinton).  Their hotel manager invites them to spend the day on an exclusive nearby beach where they are joined by a George, a doctor (Rufus Sewell) with his mother (Kathleen Chalfant) – the only genuinely old person in the film; his small daughter and his trophy wife (Abbey Lee), who has an annoying habit of discarding her bikini to show off even more of her perfect body before diving into the sea.  I was looking forward to seeing her age rapidly.

There’s also another couple, Jarin (Ken Leung) and Patricia (Nikki Amuka-Bird) and already on the beach for some unexplained reason is supposedly famous rap artist ((Aaron Pierre), who keeps having nose bleeds.  The driver who takes them to the venue incidentally is played by Shyamalan himself.

The first thing to happen is a woman’s body is washed up on the beach.  George suspects the rap artist, whose nose bleeds are getting worse.  They are all spooked when the body decomposes at the rate of several days in a single hour. Efforts to escape the beach are futile.  Things really hot up though when the children suddenly become teenagers.  Guy and Vicki’s son gets George’s daughter pregnant and she gives birth – all in the space of about ten minutes.  Not quite sure what happens to the baby, in fact not quite sure what’s happening for much for the rest of the film, as the way it is shot seems designed to keep us in the dark.  We never see most of the dead bodies – scenes are often shot with the actors’ backs in the foreground masking the situation, not even showing us their faces.  Or something will be shot in such extreme close up, that it’s tricky to work out what’s going on.

Members of the group appear at times in different outfits.  Did they bring a change of clothes with them to the beach? Just as well they thought to bring larger sizes for the children when they become teenagers.   Unlike the Hulk the kids are still clothed when they grow bigger.

Most frustratingly the intriguing idea of seeing handsome actors such as Bernal, Krieps and Lee age liked Rider Haggard’s She doesn’t really happen.  A few wrinkles and a funny walk is all we get.  Sewell gets the best make up for his somewhat baffling demise, while Amuka-Bird’s big moment consists of her having a dramatic and convincing epileptic fit – hardly ageing though.

The explanation for all these events, when it finally comes, is unconvincing and doesn’t explain the film’s inconsistencies.   This may please those who like to be intrigued and teased – fans of the old television series Lost for example – but if you like your sci-fi or fantasy to have a consistent inner logic, the film is a disappointment. 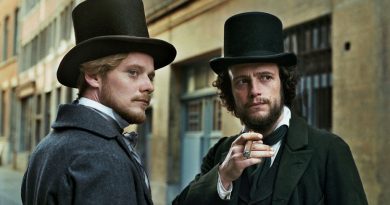