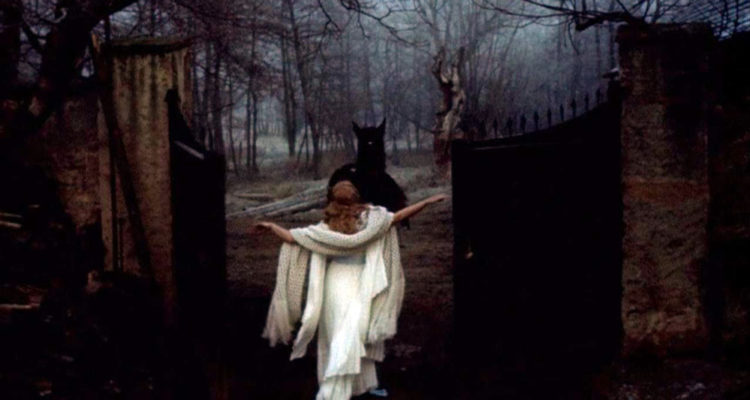 A failing merchant (Voska) gets lost in a cursed forest and seeks sanctuary in a mysterious, dilapidated mansion. When he breaks the laws of hospitality, his invisible host threatens to kill him unless he brings one of his beautiful daughters to stay in the mansion.

Only the youngest, Julie (Studenková), is prepared to enter into the bargain.

The host is, of course, Beast (Harapes), a terrifying cross between man and bird of prey, with a bloodlust to match both sides of his persona.

Will he kill Julie in a moment of despair and rage? Or will her good nature and pert curiosity melt his raging heart?

Juraj Herz is famous for The Cremator, one of the darkest comedies to come out of eastern Europe, and Morgiana, which blended gothic horror with Czech surrealism in a wonderful way.

His version of Beauty and the Beast is a wonder too. It’s like a classic Hammer film crossed with Herzog’s Aguirre Wrath of God: for every decaying palatial interior there’s a blasted, misty forest; for every track down a statue decorated corridor there is a grimy close up from a handheld camera.

The film is full of wonderful, surreal moments, as when the canopied bed, held up by real loin-clothed men, descends onto the drugged Julie; or when a disembodied, taloned hand appears to pour wine into a goblet.

These aren’t the dreamy images of Jean Cocteau’s 1946 version: there’s a harsh, violent, earthy feel to proceedings, both inside the magic mansion and in the prosaic life of peasant households seen at the beginning of the film.

Herz’s Beast’s takes a bit of getting used to but the details of beak, talon and oiled feather are ultimately truly repulsive.

Although this is a new HD transfer from original materials, it’s only fair to point out that the image quality isn’t always pristine: there’s crackle and lines on some of the shots and night shots often have a light edge on the left. For once, this doesn’t really detract from the quality of the film: the wonderful set and costume design, superb cinematography and evocative score.