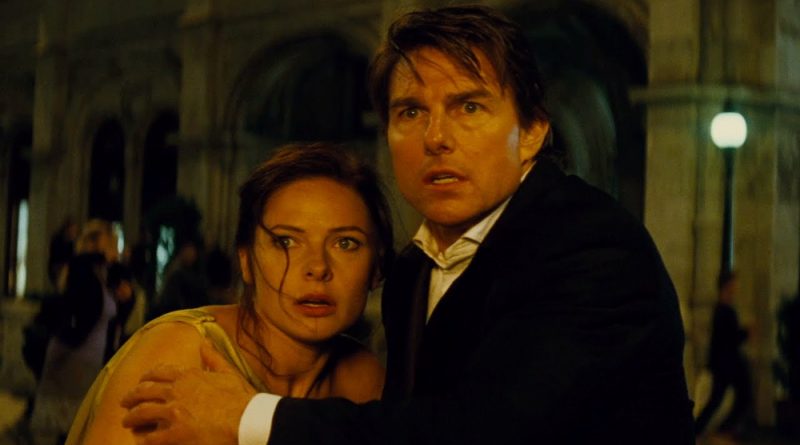 When you say “Mission Impossible 5” it engineers a universal reaction of “my God, really??”. The expectation is that, surely there should be no gas left in the tank by this point, that any film well into its second trilogy should be some awful exercise in printing money based on brand recognition. Not so with Mission Impossible: Rogue Nation; leave it to Tom Cruise to one-up himself for a fourth time, saving the franchise’s main/best villain(s) from its original TV show heyday (an ‘Anti-IMF’ named The  Syndicate) till almost 20 years after the first film hit cinemas.

After his nausea-inducing climb of the outside of the Burj Khalifa in the last outing, Brad Bird’s Ghost Protocol, Cruise gets his big stunt out of the way in the first five minutes of Rogue Nation. That shot of him clinging to the outside of a plane mid-takeoff, plastered all over the trailers and the poster, is merely a prologue; it’s Cruise and writer-turned-director Chris McQuarrie – Cruise’s new favourite guy after the unfairly-sidelined Jack Reacher – turning to the loyal audience and saying, “big stunts isn’t all this franchise is about, y’know, but here’s one anyway”.

Then we’re off, speeding on track through the brisk set-up, where Alec Baldwin’s ballbusting CIA agent is petitioning the American government to disband the Impossible Mission Force due to their unorthodox methods and cowboy behaviour, whilst Ethan Hunt (Cruise – come on, you knew that) is left “out in the cold” in London, alone and targeted by the mysterious Syndicate and its leader (a creepy, low-key Sean Harris; a real casting coup) – whom no one believes exists, apart from Hunt’s nearest and dearest teammates; the returning Brandt (Renner, relegated to suited-and-booted analyst mode for the most part – in keeping with his character as set up in Ghost Protocol), Benji (Pegg, who still doesn’t entirely fit just right into the franchise) and Luther (the ever-welcome Ving Rhames).

Sure enough, the IMF is dissolved, with Benji resigned to a desk job at the CIA and Brandt tasked with finding Hunt to play scapegoat for the CIA. Luther resigns, but is apparently still allowed on CIA grounds when Brandt needs him. The real mission begins when Hunt gets a lead on the shadowy leader of the Syndicate at an opera in Vienna, drafting/duping Benji into helping him. From there it’s a brisk journey from country to country and set piece to set piece, as all good spy films are wont to do.

Bearing in mind, however, that we’ve already had that insane stunt opener, followed by a gritty if choppily-edited escape scene from interrogation for Hunt featuring some extremely impressive acrobatics centred around a pipe… this following scene at the opera is a true statement of intent for McQuarrie, effortlessly marking his territory on the M:I franchise by presenting a scene that plays like a film from a bygone era. In fact, it’s the only sequence in any of these sequels that has even come close to matching the tone of Brian De Palma’s European-flavoured original.

Shadowy figures attempt to outmanoeuvre each other during a performance being witnessed by an Austrian politician, a femme fatale named Ilsa (Ferguson, a truly classic beauty, adding to part of Rogue Nation’s 50s aesthetic) is on the scene with her own agenda, all slinky dress and phallic rifle in hand, Pegg copies Emilio Estevez’ role in the original, and Tom Cruise is running, jumping and knifing around trying to figure out just what the hell is going on. It’s a fantastic sequence, brilliantly shot, edited and lit; it not only has its characters playing cat-and-mouse with each other, but also has the audience playing the same game with their own intuition and desire to illuminate the plot for themselves.

McQuarrie goes from strength to strength following this, as he settles into his own vibe; the closest parallel that comes to mind being that if Ghost Protocol was Ocean’s Eleven, Rogue Nation is almost certainly Ocean’s Twelve. Except McQ pulls this revamp off a lot better than Soderbergh did back in 2004. Having comfortably made a Mission: Impossible  film that has simultaneously his own stamp on it and feels like it’s part of the same franchise as those that came before it (John Woo’s M:I2 remains a sort of grungy, moody, let’s-all-listen-to-Placebo middle child).

Oodles of style, engaging plot developments and thrilling villain (take notes, Marvel) aside, Rogue Nation wears out its welcome by the end of its second act. Following one of, if not the best car chases this decade, we’re all pretty much spent. This car chase (which involves a very cool, if completely conspicuous gang of rogue agents on superbikes in the middle of Casablanca, Morocco), is immediately preceded by the second big stunt on the film – Hunt having to hold his breath for 3 minutes underwater whilst he tries to do something with a computer… it really doesn’t matter (it must also be noted that Cruise held his breath for six minutes in real life to shoot the scene – the man is nothing if not dedicated to the stunts).

After all of that, we’re all about ready to go home. There is, unfortunately, a further forty minutes of screen-time left, as the Big Bad is still out there. The last act of Rogue Nation, whilst retaining its fair share of humorous asides and moderately-thrilling action sequences, mostly runs out of steam. It exists to wrap up the plot that was perhaps a tad too unwieldy to begin with, and it takes too long by half to do that. Considering the aesthetic that McQuarrie and cinematographer Robert Elswit (returning from Ghost Protocol, and also of There Will Be Blood fame) have draped the film in, there are certainly less enjoyable experiences to numb your butt through.

Thematically, there’s a great thread running through Cruise’s latest Mission; it’s the idea that whilst the IMF and Ethan Hunt do have a certain amount of skill, they’ve also been incredibly lucky the past 18 years. It was a great choice for the film to actually embrace this action movie trope; every one of these films, from Bond to Bourne and back again, has some element of luck. It’s simply a filmic device; not only that, it’s a fact of life. Sometimes you catch your bus because you left your house at exactly the right time. Sometimes the bomb doesn’t go off because the spy’s 50-50 gamble on cutting the red or blue wire paid off.

There’s much talk in Rogue Nation on Hunt’s reliance on luck to save the day; Baldwin uses it as a reason to stop the IMF from running riot on missions better suited to an agency which doesn’t gamble so often, and Harris reminds us that everyone knows Ethan Hunt’s luck will eventually run out one day – including Ethan. Even good ol’ Benji warns him against “pushing it too far” one day. Of course, we as an audience know that we’ll never see these characters fail. But it’s a nice first step, this acknowledgement of the use of luck to save the day – a nice first step on the way to maybe one day some ballsy studio having it’s big tough macho guy lose. Rogue Nation could have upped its stakes a bit more, but as it stands it’s a thoroughly interesting take on the action flick. Not bad for a franchise up to its fifth serving.