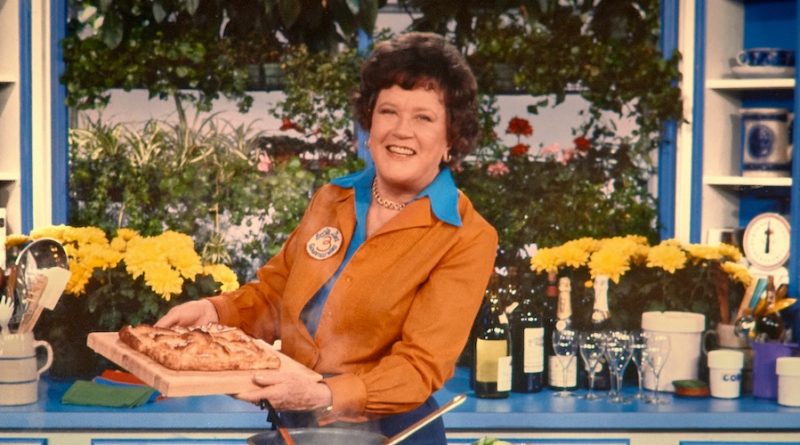 Fascinating documentary about a woman who changed the whole way of American cookery. Unexpectedly finding herself a star of TV, Julia Child brought French cooking to her home country.

The documentary Julia tells us about Julia from her early life, through her marriage and, above all, her tremendous success as the first celebrity TV chef. Very well known in the US, she is not a name that comes quickly to mind when we think of famous TV cooking experts. But, after watching this film, you will certainly know a good deal more.

She was not beautiful and over 6 foot tall, and not young – her first book came out when she was 49 and she was 51 when she had her first TV show. But she was full of enthusiasm for cooking right up to the end of her life at 91. Her enthusiasm and love of eating shines through this movie. The photography, especially of the sizzling dishes, makes this critic not only hungry but desperate for food!

We get lots of information about her early years with her family and learn about her passionate marriage to Paul. They never had children but adored each other and worked as team with him actually helping her in her TV shows in later life. Unusual facts emerge such as her homophobic early years which were completely changed when a friend died of Aids. She became an activist in the cause. There are interviews with friends and colleagues.

The film will appeal to anyone interested in cookery and also to those who are keen to find out more about one of the first TV stars in America.