Writer/Director Matthew A. Brown’s debut feature, Julia is violent, stylish revenge fantasy that sits somewhere in-between I Spit on your Grave and 2013’s American Mary by way of Kill Bill and even a small dash of Batman Begins. Star Ashley C. Williams (The Human Centipede: First Sequence) delivers a very strong performance as the titular character, and is rightfully and easily the strongest element of a film, while suffering from a few flaws, has no shortage of ideas, directorial flair and vision.

Set in Chinatown, New York, The meek Julia, a young plastic surgeons assistant is on her way to a date with Piers (Ryan Cooper). On arriving at his apartment she is almost immediately drugged and raped by him and his entourage of reprehensible party bro’s, and then left for dead. She manages to make her way home, and we discover that Julia has spent most of her life being abused by various tormentors and has turned to self-harm as a result. Julia overhears someone discussing a revolutionary new therapy that sees victims taking back power from their attackers. Her mentor Sadie, helps Julia though this unorthodox healing process, but revenge is at the forefront of Julia’s heart.

This was a really great showcase for Ashley C. Williams as an actress beyond the normal tropes of the horror genre and I can see why it would be such an appealing role. I have several scenes in my head that really stand out for me as being particularly great. My favorite shots were the sustained frames of Julia at home after her initial attack, during these Williams communicates very strongly with just her eyes, at key points even breaking the forth wall and addressing the viewer directly.

Julia’s origin story is dispensed with quickly, and the plot wastes no time shifting towards her therapy, and transformation into a seductive revenger and anti-hero of sorts. The secret organisation orchestrating Julia’s therapy headed by the mysterious Dr. Sgundud (Jack Noseworthy) and the enigmatic Sadie (Tahyna Tozzi)  reminded of the clandestine ‘League of Shadows’ in Christopher Nolan’s Dark Knight Trilogy (intentional or not).

Visually, JULIA is a stunning film. The neon-noir colour palette, with beautiful reds, greens and yellows really stood out to me throughout. The shot composition is noticeably great and clear thought has gone into ensuring that Julia’s themes of duality and transformation are reflected in the cinematography.

The soundtrack is a real highlight; it’s chilled and often sugary pop contrasting brilliantly against the harsh visuals. I especially loved the tracks ‘Julietta 1 and 2’, by the Icelandic band Ske I really enjoyed how the tracks communicated the concept of fate/destiny and transformation for Julia. The music isn’t just attractive window dressing, and serves the plot for much of Julia’s runtime.

It would be disingenuous to describe Julia as a horror film. While it certainly draws from the genre in that sometimes it’s horrifying but never really scary, it’s more accurately described as a fantasy thriller, with a comic book origin arc that demands sequels. Stylistically It owes far more to Japanese /Korean revenge thrillers Audition, I Saw the Devil and Old Boy.

The supporting cast do a fine job but there is never any doubt that this is William’s film from the outset. My chief criticism is that while Julia is never less than beautiful both visually and aurally, from a purely narrative viewpoint I wished Julia spent a little bit more time focussing on Dr. Sgundud’s organisation and explaining the various plot points of its slightly rushed final act.

Ultimately, Julia is a superior revenge film with an excellent and original look, sound and lead performance that rewards multiple viewings. I look forward to seeing Ashley C. Williams and Matthew A. Brown collaborate again on this interesting character.

Julia is out now on DVD and digital. 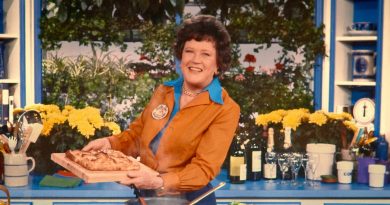