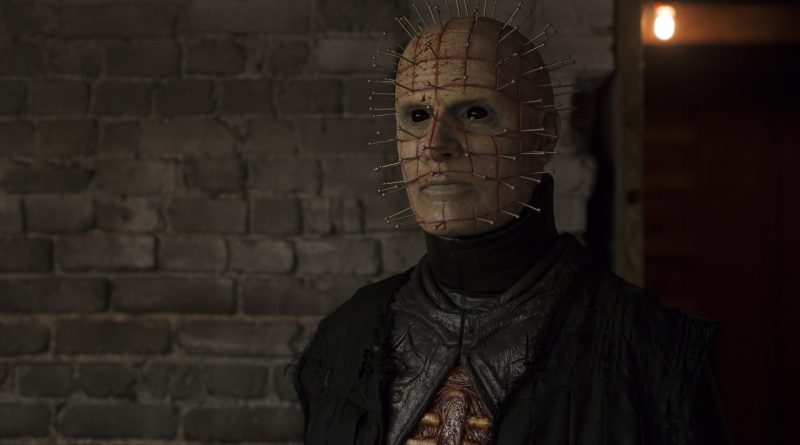 A very gory, cheap-looking shocker that manages to breathe new life into the Hellraiser world.

Cops in an unnamed US city are chasing a serial killer called Preceptor. Preceptor does really nasty things, such as sewing a small dog into its owner’s womb.

Someone like Preceptor is going to come to the attention of the Cenobites, the quasi-supernatural beings who relish pain and entice unsuspecting humans to experience their world of ecstatic torture.

At the same time, new decade, new rules: the Cenobites have had the management consultants in and future-proofed some of their processes.

Each invitee to their world of pain must now undergo an audit, be assessed, judged by a jury of 3 decaying, naked women and then cleansed in a two-part process, by both The Surgeon and The Butcher.

Heads up, I don’t know much about the Hellraiser franchise. In other words, anything between 1992’s Hellraiser III: Hell on Earth and 2011’s Hellraiser: Revelations (the ninth in the series – see below).

Hellraiser: Judgement is the tenth in the series and it is pretty good: gory and witty and veering off into David Lynch weirdness territory.

The focus is on the detectives investigating Preceptor. Some fans have found that remiss, but it works dramatically.

This dramatic curveball contrasts well with the film’s weird additions to the Cenobite myth.

Firstly, the details of the audit process, which involves characters ingesting paper and vomit as well as lots of sharp knife action. The scenes of perverse bureaucratic violence are disturbing and well done, an unholy blend of Guillermo del Toro and David Lynch.

Secondly, the Miltonian Christian context that is given to the Cenobites: we see the archangel Jophiel (Helena Grace Donald) reminding Pinhead (Paul T. Taylor) of the rules of the game, even though he is loathe to obey them.

Thirdly, there are some nice ironic touches in the script. For example, Pinhead’s opening thoughts on the infamous puzzle box: “Obsolete … We need something more than just a wooden box.”

Or The Auditor’s riposte when one of his guests screams “Jesus Christ!”: “Heavens, no. Same city, completely different zip code”. Director Tunnicliffe plays The Auditor nicely: he has the voice and some of the facial mannerisms of Doug Jones’ Abe Sapien in the Hellboy films.

Fourthly, the violence is extreme and gory and feels ruthlessly ritualistic every time.

Finally, the film feels short and punchy at 81 minutes.

Hellraiser: Judgment never outstays its welcome, even if it does sometimes look a bit cheap – although not in the Cenobite scenes of violence which is where it counts.

The film was made very cheaply, solely so that Dimension Films could keep ownership of the Hellraiser brand.

Two young uns on a roadtrip to Mexico (the store room in a light industrial premises stands in) are invited to experience something new after a Tijuana hooker dies.

Fast forward several months: their parents find themselves under attack when one of the teenagers shows up unexpectedly.

Script, acting, sets – all are excruciating.

Hellraiser: Judgment and Hellraiser: Revelations are on Digital Download 22 February and Blu-ray/DVD 1 March from Lionsgate UK