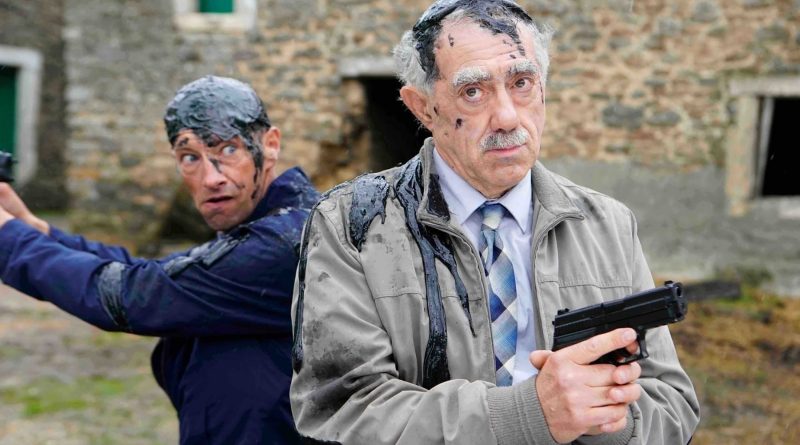 If weird, deadpan comedy with a whiff of cosmic horror is your thing, step right in.

The flat lands of rural Normandy, France: farms, fields, tractors, a caravan site, a migrant camp, a town with a pebble beach.

Is it any wonder Coincoin speeds along those country lanes without a driver’s license? After all, his ex has left him for a female farmer and his best friend Fatso has got him involved in local right-wing politics.

Cops and teens suddenly have something more important to deal with: an invasion that is Not Of This Earth. It is heralded by dollops of foul-smelling black gunk that fall from the sky, but soon the gunk is cloning humans. How will humanity fight back?

Dumont’s standalone TV series, now released digitally in the UK, is a sequel to 2012’s L’il Quinquin. The actors, comic tone and, heck, even some of the shots are exactly the same. And that is a very good thing.

Pruvost’s Van der Weyden is the key to Dumont’s comic cosmic horror. It is his facial tics and physical spasms that define the world of the film. It is a world of broken puppets: their repetitions, inarticulacies, stutterings, stammerings, loops of time and sense, clichés.

Van der Weyden says several times that the gendarmes are there to preserve the distinction between chaos and order. Nothing could be further from the truth. The capitaine and Carpentier embody the underlying condition and emergent properties of chaos, in their attempts to bring order to their world.

The widescreen format, flat light and digital deep focus suggest a sort of monumentality to proceedings. But this only makes the contrast greater with what is represented therein. At all times, the characters’ actions sync with Dumont’s vision of human endeavour as the en masse winding down of broken automata.

That all sounds a bit heavy. What’s so enjoyable about this film is that Van der Weyden and Carpentier are a great comic duo.

Their mannerisms may be well on the way to becoming medical conditions but they are also inherently funny. There is lots of deadpan slapstick comedy here and even an homage to one of Buster Keaton’s most famous gags.

Some people may find that the film borders on the ‘disablist’ and is therefore not funny at all. Well, that’s a conversation to be had. Personally, I don’t think there is a necessary and sufficient argument that that is the case. I was in stitches a lot of the time while watching this, but I admit that I was laughing at human frailty and human physical pretensions.

There are other issues to consider. Is it currently appropriate to portray cops as bumbling and funny? What is the film’s attitude to the groups of migrants who pop up every so often and take part in the slightly banal ‘cultural melting pot’ carnival scene at the end?

Obviously, there’s an implicit connection in the film between the ‘invasion’ and the arrival of migrants in northern France. Given the ironic tone of the film, Coincoin and the Extra-Humans can’t be blamed for not having an answer to a real-world problem. But it is in part a satire on racist attitudes, especially those held by the forces of law and order.

Perhaps there is one thing in the film that can be applied to the real-world situation: for all Van der Weyden’s talk of the apocalypse, clones and humans appear to co-exist with only some slight confusion for other people.

Coincoin and the Extra-Humans is on digital release from 24 July 2020.