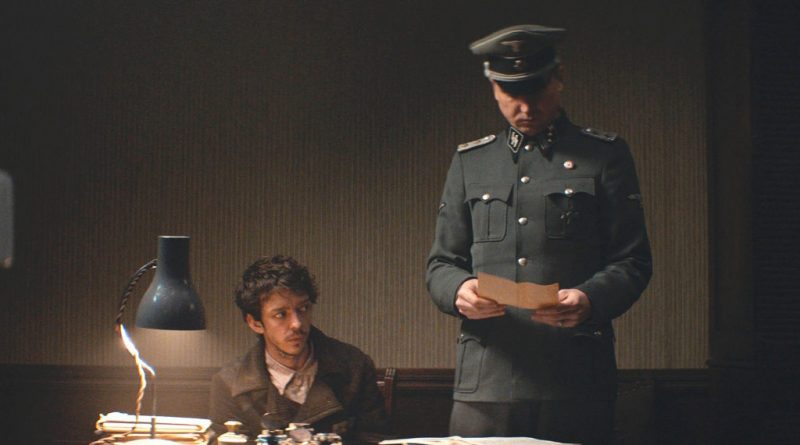 It’s 1942 in France, under occupation by the Germans. As a captured prisoner on his way to a concentration camp with other Jewish prisoners, Gilles (Nahuel Perez Biscayart) exchanges food for a book of Persian poetry.

Later, about to be executed, Gilles announces that his name is Reza (the name on the inscription in his new book) and he is not Jewish but Persian. Surprisingly, the Commandant of the concentration camp, Koch (Lars Eidinger), who is in charge of the kitchen, wants to learn Farsi to enable him to open a German restaurant in Tehran, where his brother lives, after the war and he wants to learn to speak Farsi. ‘Reza’ is taken to Commandant Koch, tells him he speaks Farsi and is told he must teach Koch.

Gilles is now in the peculiar position of teaching a language that he knows nothing at all of. Although other German officers are suspicious, Koch accepts and believes in his teacher-prisoner. It’s really difficult for Gilles to remember the thousands of words which he has made up and taught the Nazi officer. It is all just gibberish. Gilles finds an ingenious way to remember the words and becomes close to Koch in the process.

This is another of the movies which starts by saying it is, “inspired by true events.” Quite how much is true is left in doubt as a number of incidents and even accents don’t quite match up. But the film is gripping and there are two very good performances by Perez Biscayart and Eidinger. A holocaust survival story with a difference. The ending is mind-blowing.

Available on digital download now and DVD from 8 February.