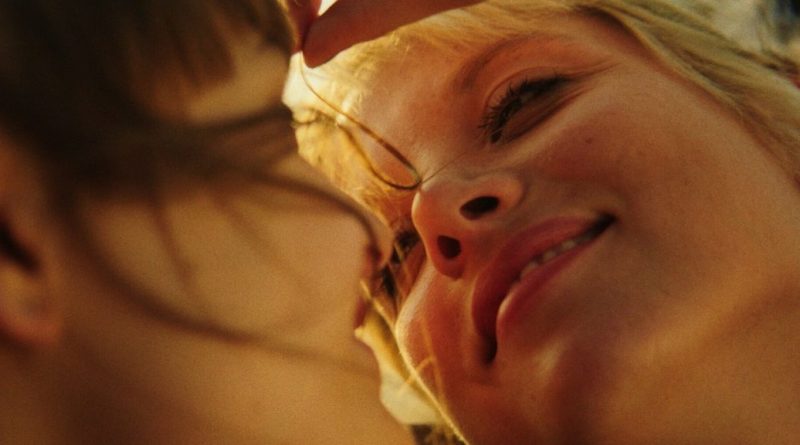 Berlin, summer 2018: Nora (Lena Urzendowsky), who is 14-years-old, lives with her mother and sister. Not knowing how to behave, she spends her time trailing behind her older sister, Jule (Anna Lena Klenke) and Jule’s best friend Aylin (Elina Vildanova). It’s a very hot summer and the girls spend a lot of time in pools with the older girls’ friends.

The sisters get little attention from their alcohol-loving mother who is often just not present as she prefers bars to home life and doesn’t take care of her daughters. Wanting to keep something from her younger years, Nora looks after caterpillars (reference the title of the film) in glass jars under her bed.

One day Nora has a very bad experience when she starts menstruating for the first time. As if this isn’t awful enough, she is in the middle of a mixed sex gymnastics class with her sister and Jule’s classmates looking on when this happens. An older girl, Romy (Jella Hasse) helps her to clean up and they become very close. Going places and just hanging out, Nora falls in love with the attractive Romy. Romy, however, is still keen on the company of boys and Nora gets upset watching her flirt and neck with different boys.

Very good photography of the city and colourful caterpillars under the direction of Martin Neumeyer. As summer ends, Nora’s favourite caterpillar turns into a lovely butterfly.

The director, Leonie Krippendorff, who also wrote the screenplay, captures the sometimes lovely, often awkward, moments when a young girl discovers her sexuality. She depicts the difficulty and embarrassment of getting a first period. As many of the young boys around are from a different heritage, mainly Muslim, the director also deals with issues of race, getting pregnant and the difference between love and sex. Nora is shown blossoming from a child into a young woman.