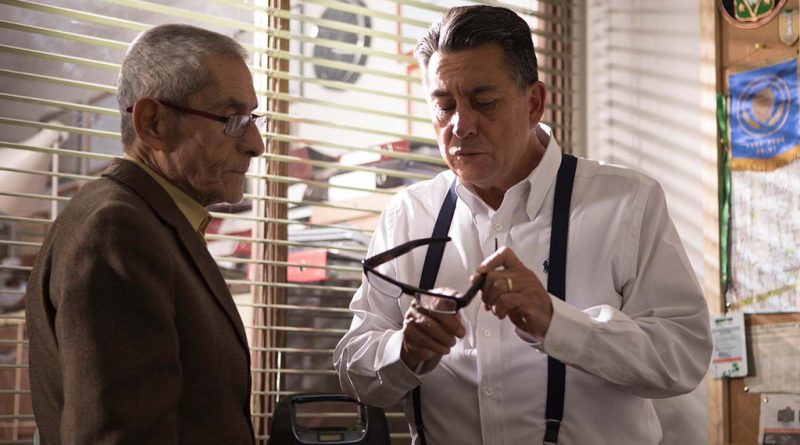 A daughter wishing to find out how her mother is being looked after in the nursing home where she has been placed, goes to a Detective Agency to help her.

The daughter wants to be assured that her mother is being properly and well cared for. With his regular older spy unavailable, Detective Romulo Aitken sets up interviews with seniors in Santiago, Chile. What follows is an amusing series of interviews with elderly men who are excited to be in line for a job, but have little or no idea of how to use the necessary technology to film, make notes and report back to the Detective Agency.

Detective Aitken decides to appoint 83-year-old Sergio Chamy as the Mole for three months. Sergio, a widower, is happy to have a job and looks forward to an interesting time at the nursing home in Santiago. Although Sergio is hopeless at using the technology he has been given for the work, he is very good at forming relationships with the residents he meets at the home. There are very many more women than men at the home and Sergio quickly becomes very popular.

How Sergio integrates himself into the life of the nursing home and becomes both a target for the romantic attentions of one resident and the confident to a number of other residents, is the main idea behind director, Maite Alberdi’s fascinating documentary.

But, in fact, the film develops into a much more contemplative look at the lives of the residents and considers the issues that drove them to live in a cared-for facility. Many of the women are single and after having cared for their own elderly patients have nobody to look after them in their senior years.

Alberdi also brings in how the residents cope with isolation and loneliness. Sergio discovers that not only the elderly lady he has been sent to spy on but also many of the other residents have no, or very few, visits from their families. The director even brings in sexuality in relation to older women. Berta, who has set her cap at Sergio and is religious, confesses, “I would consider giving God my virginity through my future husband.”

This is another documentary (rather like Il Mio Capo) where it plays like a fictional movie. Alberdi has captured not only the life of the residents but she has also got into their real personalities and we are given a sometimes amusing, often heart-breaking, look at life in a seniors nursing home.