Gibson’s personal and professional star has not been riding high of late but here he shows that he can still do the action hero number effectively, albeit as a somewhat older and grumpier one drawing, it has been suggested by some commentators, on his personal experiences for the character’s deep seated anger.  He plays Link, a tough ex convict and former alcoholic, who is now living a blameless and humble life on a trailer park and earning his living as a tattooist.   Until that is his estranged 17 year old daughter Lydia (Moriarty), who went missing three years earlier and is now on the run from the drug dealers she’s been hanging out with, turns up again in his life.

The film is in many ways more interesting than the average action movie.   It has nice touches of ironic dark humour from the very opening scene which has a smart joke about contrasting American attitudes to guns and cigarettes   It’s also good to see Gibson, face now heavily lined and sporting grey hair and a beard, matched not with a love interest some 25 or so years younger than him in the sad Hollywood tradition but with an age appropriate co-star as his daughter.  Moriarty as Lydia has a certain charisma and director Richet and the screenwriters develop the father/daughter relationship in a way which is both interesting and believable.

Not that the film is lacking in action, some of it startlingly violent.  Particularly effective is a chase sequence with Link and Lydia on a motor bike, where Gibson reminds us of Mad Max, only grown old.  Also a really scary scene where Link’s trailer home is destroyed by the drug gang’s gunfire while he and Lydia are in it and a blood soaked, long drawn out climactic shoot out, as the genre demands.

There’s are effective performances from Luna, both sexy and scary as Lydia’s drug dealing boyfriend Jonah and from a somewhat emaciated and underused William H. Macy as Link’s Alcoholics Anonymous sponsor and friend.   Michael Parks plays an interesting supporting character as Link’s Vietnam veteran former associate known as Preacher but it is one of those roles where a better known veteran face would have been more effective. The character doesn’t quite have the heft that say someone like Harvey Keitel or Christopher Walken might have brought to it.  But maybe the budget wouldn’t run to that.

Interestingly the film has French backing and a French director Richet, who made the scary and violent “Mesrine” movies.  I doubt though that this will be up for awards for cinematic artistry.  It is cheap and cheerful pulp fiction with more than a touch of Tarantino, none the worse for that and actually rather good for what it is. 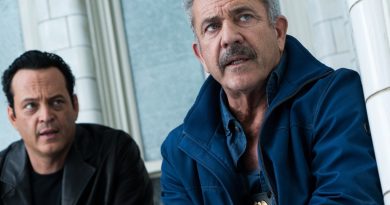