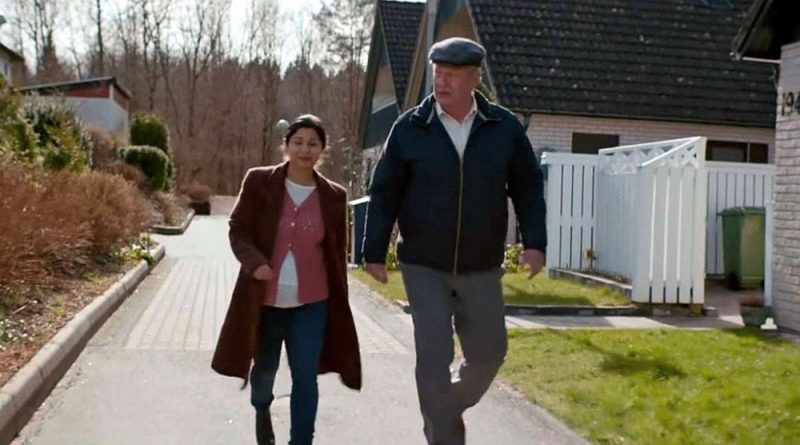 This is a warm and delightful character study of “a man called Ove” (Rolf Lassgård).  When we first meet him he appears to be just a grumpy old man or, as someone describes him, “a nit picking obstructionist”, fussing over the regulations that he has imposed on the small estate community where he lives.

But then we start to get inside his world, which sounds grimmer in summary than it comes over on screen.  We discover that he has recently lost his beloved wife Sonja (Ida Engvoll), whose grave he visits every day.  He makes several attempts at suicide in order to join her, which take us into flashbacks of his past.  But he is always interrupted in his intention by the world outside, which still needs him.

For a start there is his new neighbour, the pregnant Parvaneh (Bahar Pars), who has just moved into the house opposite with her husband and two daughters and is in need of a new friend.  Then there is his long time chum Rune (Börje Lundberg), who is now wheelchair bound, and Rune’s wife Anita (Chatarina Larsson).   One of Sonja’s former pupils at the special needs school where she taught has a gay friend Mirsad (Poyan Karimi).  Mirsad needs somewhere to live, when his father won’t accept his son’s sexuality and Ove finds himself giving Mirsad shelter.  And there’s the stray cat, also in need of a home and who insists on adopting him.   As we get to know Ove better – the circumstances which shaped him as a child and an awkward teenager and the joy, comedy and sadness of his love story with Sonja, we come to understand him and like Parvaneh’s children may even start to think of him as grandpa

The film has a lovely light touch and humour and although it has its sad elements it is never sentimental.  Lassgård is really good, as are Filip Berg as his younger self and Engvoll, who with her warm smile makes it clear why she is the only love of Ove’s life.

The film also acknowledges the diversity of contemporary Swedish society without making it a big issue.  The fact that Parvenah, who becomes like the daughter he and Sonja never had, originates from Iran is almost irrelevant, apart from a scene where Ove is teaching her to drive and he points out that compared to what she has gone through – escaping from a war zone and giving birth – driving will be a doddle.

The film never over states its message but gently makes it clear that life is always worth living and indeed no man is an island.  It has a universality which should appeal to audiences everywhere.