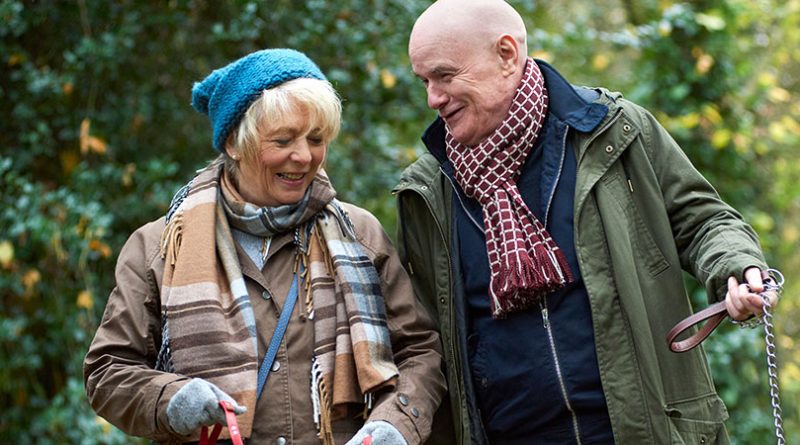 23 Walks is a lovely little British film. It is almost like a film from the old days. This is a gentle love story about two people in their late 60s. Director Paul Morrison, who also wrote the screenplay, has given us a sweet tale which seems like just a simple story, but actually exposes the way society works – the difficulty of a later life relationship, the hard part of being too poor to pay the rent and the joys of owning dogs!

Built around the 23 walks in a north London park that Dave (Dave Johns) and Fern (Alison Steadman) take with their dogs, it shows the development and ups and downs of their relationship. The two met as they walk their dogs – hers a small Yorkshire terrier called Henry while Dave has a large Alsatian, called Tillie. At first there is antagonism between the two but gradually the dogs become friends and so do the humans.

But Dave had a major secret that he has kept from Fern. When it is revealed, it is almost more than Fern can cope with. Later Fern reveals a secret of her own.

The walks take place in little scenes throughout the year and Morrison has given us some lovely pictures of the changing seasons. The two actors work so well together that the whole story with its various bumps along the way seems completely believable. We are able to overlook the parts where it all seems a bit too easy.

Dave Johns, who gave such an excellent portrayal of a man at the end of his tether in Ken Loach’s I, Daniel Blake is a down to earth married man whose wife, he tells Fern, died two years ago. As his affection for Fern grows, he has to counteract his grown-up daughter’s negative views of the relationship. He is tested by society when he loses his home and is forced to move to the outskirts of London. The Geordie actor is just right in the part of man coming to grips with new emotions.

Alison Steadman, who we are used to seeing in a string of magnificently executed roles for Mike Leigh, comes into her own here as an older woman who is scared of committing herself as she is so afraid of being hurt.

I mustn’t forget the two dogs who display acting talents of their own! I’m sure that dog lovers will enjoy this film. And for those who appreciate fine performances, this will suit you as well.