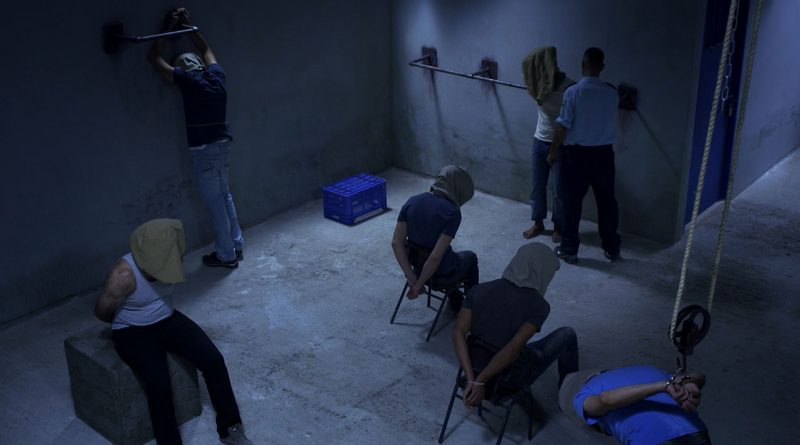 A superb piece of “survivor cinema”, Ghost Hunting is tense, humane, disturbing and witty. It’s also very well shot and edited. For all of these reasons, the film won the Silver Bear for Best Documentary at the 2017 Berlin Film Festival.

Director Raed Andoni interviews a series of Palestinian men in the large basement of a building in Ramallah. He is looking for men who can be both cast and crew for a project that will see them reconstruct the interiors of a notorious Israeli prison.

Each man (except for professional actor Maqdisi) has been incarcerated in the Israeli prison. After they have constructed a set, they will set about acting out their own experiences of incarceration and interrogation at the hands of the Israelis.

The concept is “meta”, but works perfectly.

The auditions, rehearsals, set design and construction of a cell row are all cut together. Boundaries blur all over the place. Everything is, of course, both constructed and acted, so the director ends up in a cell and some of the men act as Israeli guards. One actor worries that his fiancée will see the film, because of a scene in which another actor playing a guard (or is it an inmate?) comes on to him.

You watch and hear these men relating their disturbing experiences, and some interrogation and torture techniques are demonstrated; but the focus of the film is on the men’s interactions as they build this world, make it concrete from memory. There is a lot of tense editing of reaction shots as conversations and bickering break out.

It’s the actors and their characters who make the film. Andoni somehow keeps them completely natural in front of the camera and allows them to exude fully rounded individuality, as if they are supporting characters in a Shakespearean play with no hero.

Where The Act of Killing revels in its ghastly grotesqueries and Shoah overwhelms with the harrowing intensity of its spoken witness, Ghost Hunting simply foregrounds individuals and their actions.

By reconstructing their prison pasts, they admit that incarceration still defines their lives – not least because of the ongoing Israeli occupation of the West Bank and Gaza – but they find a way to start to “own” their former submission, as director Andoni has said.

The film includes some lyrical and emotive animation. In one sequence, we see the POV of a tied-down prisoner looking out from under his hood: his teardrops splashing on the floor turn into a hallucinatory fantasy of escape. It is very moving.

Ghost Hunting presents a warm vision of humanity and human solidarity. For these men, solidarity brings a sense of identity that is the originary act of resistance against political oppression.