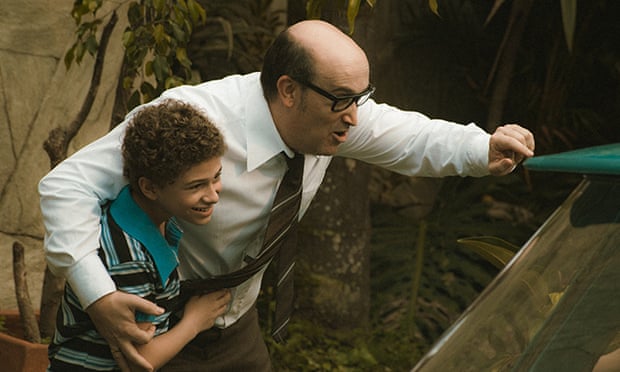 Héctor Abad Gómez was a much loved figure in Colombia in the seventies and eighties.  A university lecturer, who campaigned for public health and was also an outspoken critic of the repressive government, he was shot dead in his home town of Medellín by far-right paramilitaries in 1987.

Memories of My Father is the cinema adaptation by director Fernando Trueba and his brother David of the novel that Gomez’s son Héctor Abad Faciolince wrote about his father and their relationship – a novel which is regarded as a masterpiece of contemporary Spanish-language literature.

The story is told very much from the point of view of young Hector, played as a child in the 70s by Nicolás Reyes Cano and as a young man in the 80s by Juan Pablo Urrego.

As the only boy, Hector is the darling of a family which, apart from the father, consists of a positive tribe of beautiful and talented sisters and their strong and forbearing mother Cecilia (Patricia Tamayo).  Hector’s childhood is remembered in warm, sunny colours, while the scenes of him in the 80s as a student in Italy, who then returns home when his father is forced into retirement by the regime, are in colder, crisp black and white.

Seen through young Hector’s eyes, Hector Gomez (Javier Cámara) is a loving and jovial figure, who cuddles his son and nurtures the child’s intellect.  We gather however that Gomez is perceived by the establishment as a dangerous Marxist atheist, though when at one point he is forced out of the university and into exile for a period, like young Hector, we don’t really know why.

It is only in the second part of film, when Hector is an adult, that we get more of an idea of the political background and the reasons why the now retiring Gomez is so adored by his students and other members of the left wing.  Even then though, slightly frustratingly we get little detail of the Colombian regime, although all we really need to know it is that it is the antithesis of everything that Gomez has been fighting for all his life.

In this tribute, initially from a son to his father and now from a film maker intent on translating the essence of a beloved novel to film, it is the humanity and dedication that Hector remembers in the man, which is at the heart of the story and is beautifully conveyed in Cámara’s performance.