If you’re one of those who read and enjoyed James Bowen’s best selling book of the title, you should also enjoy the film based on it, which is true to it in spirit and some detail and really brings the tale to visual life in a delightful, funny and heart warming movie.

At the time when the story begins, James (Treadaway) is a junkie, attempting to get off dope via a methadone recovery programme and living a miserable life on the streets, scraping a few coins as a busker.  His support officer (Froggatt) manages to get him a sheltered accommodation flat, which is when Bob, the scruffy and injured ginger tom cat of the title, moves in on him.  And even though the last thing James needs is a pet, Bob just refuses to go away.  With the help of his animal loving neighbour, Belle (Gedmintas) James finds a vet to treat Bob’s injuries and after that the two become inseparable.  The cat even follows James onto the bus, when he is going into the West End to do his busking, and with Bob sitting cutely on his shoulder and capturing the oohs and ahs of his audience and more money in the hat, James’s luck starts to turn for the better.

Treadaway, who gave an award winning performance as the autistic young hero of the National Theatre’s hit production “The Curious Case of the Dog in the Night Time” is very good casting as James.  He looks suitably grubby and down and out but gives the role a very engaging personality, enhanced by a slight, cheeky Australian accent (the character was raised as a child “down under”). The other human actors include an ultimately moving performance by Anthony Head as James’s estranged father, who initially wants nothing to do with him.

But the star of the show is inevitably Bob himself, played in many scenes by his real life self, along with some very convincing and identical trained stand ins for the technically tricky bits.   He is very much a cat of character, loyalty and determination and director Spottiswoode has managed to capture those telling details of feline behaviour, which any cat lover will recognize.

The film has a good sense of the streets of London, including Covent Garden, where Bob first made his mark.  It also has its serious side in terms of showing the grim side of the city’s homelessness and poverty and the horrors of drug addiction.  One scene which stays in the mind is near the beginning of the film, when James, who hasn’t eaten all day, is a few pence short of the pie he wants to buy.  Rather than let him have it, the shop owner taunts him by throwing the pie into the rubbish bin.  Also notable is a disturbing sequence of James going “cold turkey” with Bob looking on in apparent concerned puzzlement.

This is though primarily a charming and often very funny film, which manages to be warmhearted without being sentimental and will have you smiling and rooting for Bob and James in the ups and downs of their journey, until we end with James’s encounter with the publisher. who wants to help him write his story.  I defy anyone who has a heart not to love it – unless perhaps you’re one of those strange people who doesn’t like cats. 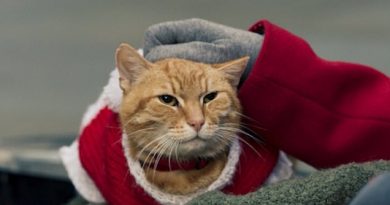 A Christmas Gift From Bob