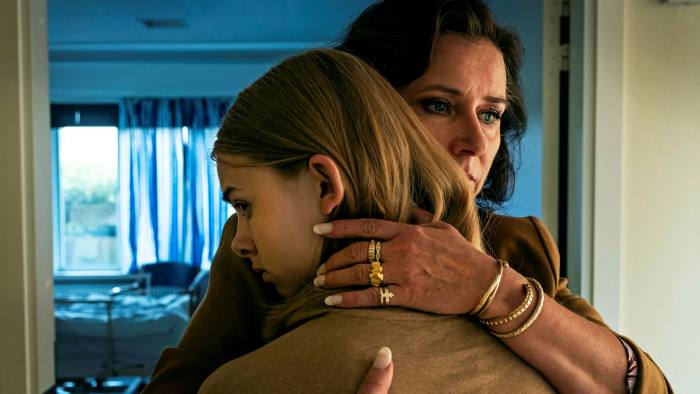 The storyline of this highly effective and disturbing first feature film from Danish director Jeanette Nordahl could have become a female version of The Godfather.  But Nordal has created something more low key and disturbing.

After the death of her drug addict mother, 17 year old Ida (Sandra Guldberg Kampp) is sent by her social worker to live with her mother’s sister Bodil (Sidse Babett Knudsen).  Ida hasn’t seen her aunt or her three cousins since she was a tiny child but they are family, so she does her best to settle in.

Bodil’s youngest Mads (Besir Zeciri) still lives at home, Jonas (Joachim Fjelstrup) and his partner and baby are around a lot but the eldest and Bodil’s best beloved David David (Elliott Crosset Hove) is a wild card junkie, who disappears from time to time.

The family live in a smart house and seem to have plenty of money, which Ida comes to realise comes from the protection rackets that they run.  But they are family, so she has to accept it.

Until one of the family’s not so friendly visits to a client who hadn’t paid up goes tragically wrong and Ida is identified by the authorities as having been on the scene, dividing her loyalties.   Will she tell the truth and save herself or keep quiet and protect the family?

Babett Knudsen, well known internationally for her roles in Susanne Bier’s films, is strong, warm and at times terrifying as the matriarch, while the brothers, particularly Elliott Crosset Hove as David make for a volatile and sometimes scary trio.

The centre of the film though is Ida.  17 year old Guldberg Kampp, also making her feature film debut is totally charismatic.  She doesn’t act as much as just be and we can see what she is feeling from her stillness.  She is both beautiful and compelling.  A talent to watch.