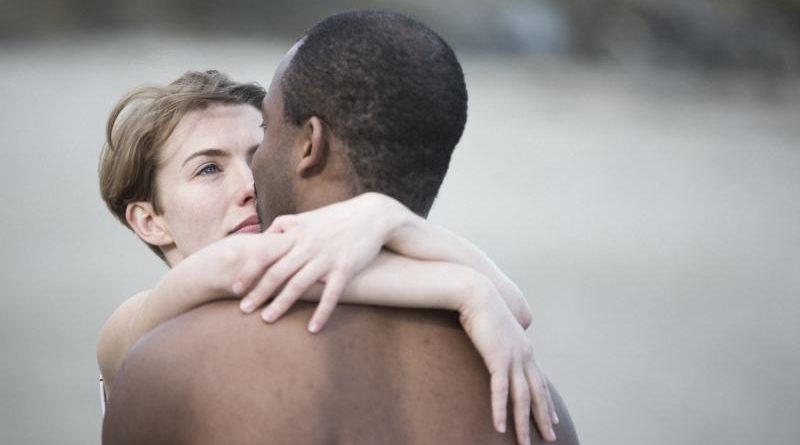 Director Justin John Doherty’s film has been compared to a Charlie Parker riff.  I am not sufficiently jazz literate to confirm that but one of its two central characters, John (James Barnes) is a jazz musician (though we never actually see him playing) and there’s certainly a lot of jazz used on the soundtrack.

The story is simple.   John and Alice (Katharine Davenport) meet at a jazz club, are strongly attracted to each other and after a night of passion seen in flashback, speed off to Cornwall for a weekend break and more passion.  In the course of their stay cracks and conflicts emerge in their relationship, proving that a couple cannot live by good sex alone.   So do they or do they not have the basis here for a long term relationship?

At first they can’t find the key to the cottage they’ve rented.  Then they get turfed off the beach by a posh elderly man (Geoffrey Bersey), who claims it as his private property.

Later they have dinner with another couple, fellow musician Charlie (Sebastian Badarau) and his wife Francis (Bean Downes), in the course of which Alice is not best pleased, when she realises that John and Frances have a past together.  And she gets somewhat cross again. when she and John find themselves stranded on the beach by the tide.  As the story appears to be set in the sixties (though for no particular reason that I can see), they have no mobile phone to call for help and just have to sit it out and discuss their relationship.

Other clues to the time period are Alice’s clothes and haircut and most of all the vintage reel to reel tape recorder shot in loving close up, on which Charlie and Francis at their dinner party play the sort of freeform jazz that was very popular at that period.

It’s all very pleasant if somewhat slight.  The shots of the Cornish landscape should help boost this summer’s expected staycation boom and the actors, particularly the young couple, are all good.  Perhaps out of present day sensitivities, no mention is made of the fact that John is black and Alice is white, which in the sixties might well have been an issue.  Even the bloke on the beach – he could arguably be attacking John out of unspoken racism, in which case one would expect John and Alice to be aware of this and perhaps mention it?   Maybe though he’s just a rude and bad tempered old git.

An interesting footnote on the film, which was completed in 2017 and has since been cruising the festival circuit, is that apart from the heads of departments, all the crew members were students at the Falmouth University’s School of Film and Television, where the film’s screenwriter, Neil Fox, is a lecturer.  The then students do an excellent professional job on the film and hopefully have now gone on to careers in the mainstream film industry.

“Wilderness” is available to download/stream from outlets including Sky Store, iTunes, Amazon, Google and BT.