Josh and Cornelia (Stiller and Watts) are a 40-something couple who like their life as it is. He’s a former wunderkind documentary maker who has been working on his sophomore effort for the better part of a decade, and she’s a successful producer. They watch their friends start a family, but don’t feel burdened by the need to conform to having a child, nor do they judge anyone that does by their own responsibility free standards.

On a night out they meet a free-spirited twenty-something couple, Jamie and Darby (Driver and Seyfried), a pairing so cool they say “fuck you” rather than “love you”, and who enter their lives and tap into a kind of Peter Pan complex the two don’t even realise they had. He starts wearing an age-inappropriate hat and she starts crunking to hip-hop tunes in her down time. The reactions of those around them, and their own self reflections upon what they’re doing with their lives, throws their careers and marriages into irreparable turmoil.

Noah Baumbach has definitely found his groove; following on from his most accessible film to date, the terrific Frances Ha, While We’re Young is so effortlessly charming and wryly observed, it’s like a more subtle, relatable This is 40.

The jokes sometimes veer wildly in tone, from farce – a strange Zoolander style peyote party – to smile inducing – Darby’s cats are called “Good Cop” and “Bad Cop”, but the whole thing is carried along sprightly by the wonderful cast and a kind of grounded Wes Anderson style of storytelling, that any imbalance is completely unnoticeable.

Stylistically it’s the montages that stand-out; there’s a wonderful sequence that introduces Driver and Darby, which is intercut with Josh and Cornelia’s more mundane life, and the same technique is used later in the movie as they’re assimilating with the lifestyle of the younger couple, Stiller struggling to come to terms with riding a bike and Watts awkwardly throwing shapes to rap music.

As with Frances Ha, which could have been construed as smug had it not been for the superb Greta Gerwig, While We’re Young works thanks to the cast. Watts seems to have made it her aim to send herself up and have as much fun as possible after Diana, and along with Stiller provides a wholly resonant core to a film about the insecurities placed on us by having to grow up. Both are likeable, funny, and believable, even when the script veers too much from the exploration of mid-life paranoia and strives for more unbelievable dramatic beats, their characters have your empathy locked in.

Driver plays the same hipster cad he has for most of the embryonic stages of his career, utterly charismatic in a way that completely validates Ben Stiller’s mancrush on him. Charles Grodin shows up to dominate almost every scene he’s in, providing a counter-balance to the age jealousy that is driving our main characters. Only Seyfried, who is hippie-cute, gets short shift as a background wallflower who grows redundant as the film unfolds.

As much as it unexpectedly descends into silliness, for a Baumbach film at least, it exceeds such moments with intellectual, biting zingers, almost all of which hit, and takes a few surprising narrative twists as the drama is played out by a never-better cast. 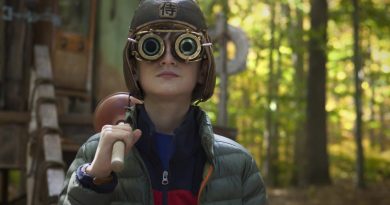