Lui (Dario Argento) and Elle (Françoise Lebrun) are an elderly couple, living in their cluttered apartment stuffed with the books, photographs and other memories of their long life together.   Elle has dementia, Lui a weak heart.  Elle, a former doctor, still keeps writing prescriptions for herself and has a cupboard stuffed with drugs.  She also tends to wander off leaving the apartment door open, much to Lui ‘s chagrin.   He is a writer, perhaps a film critic, who is trying to write a book about the connection between films and dreams and not getting very far.  This is not helped when his wife, believing she is tidying up for him, takes all his notes from his desk, tears them up and flushes them down the lavatory.

So far this doesn’t sound too intense, just rather sad.  But the intensity increases when we meet their son Stéphane (Alex Lutz) and his rather annoying little boy Kiki.  Stéphane has mental health problems of his own, plus a history of drug addiction and a seriously ill ex wife.   He is not surprisingly worried sick about his parents but his father refuses to take any action, such as getting a psychiatric assessment for Elle or thinking about moving into supported housing.   He just keeps saying he has it all in hand in that he has “made a list”.

Apart from a few small supporting roles the focus is on these three characters throughout.  Interestingly however one of those supporting roles is that of Lui’s mistress, who has lost interest in him.   Even though he swears his loves his wife, Lui is trying to get her back, saying he loves his mistress too.  It is a situation which is a bit of an unnecessary distraction from the main story but after all, this is France.

The performances are all totally convincing, most particularly that of Lebrun in her depiction of dementia.  The director uses the very effective device of splitting the screen in two throughout.  Sometimes you see simultaneously a different angle on the same scene, as opposed to the usual shot and reverse angle shot, at other times it is two different scenes happening simultaneously, as when Elle goes missing and Lui is trying to find her.   It’s a technique which also highlights the separateness, the distance between even those who love each other.

Perhaps to emphasise the potential universality of the couple’s situation, instead of giving his two main characters names, Noé calls them just Lui and Elle – the French pronouns for him and her.

Towards the end of the film the director ratchets up the misery to such an extent that it really is slit your wrist time.   And at two hours and twenty minutes the film goes on far too long with what is a very long drawn out conclusion.

It is a tough watch but you can’t help but admire its merits.  I do wonder though if the British Board of Film Classification should have issued it with a special certificate, which only allows over 60s to see it, if accompanied by a positive and cheerful younger person! 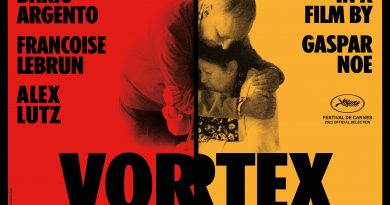 Vortex in cinemas 13th May