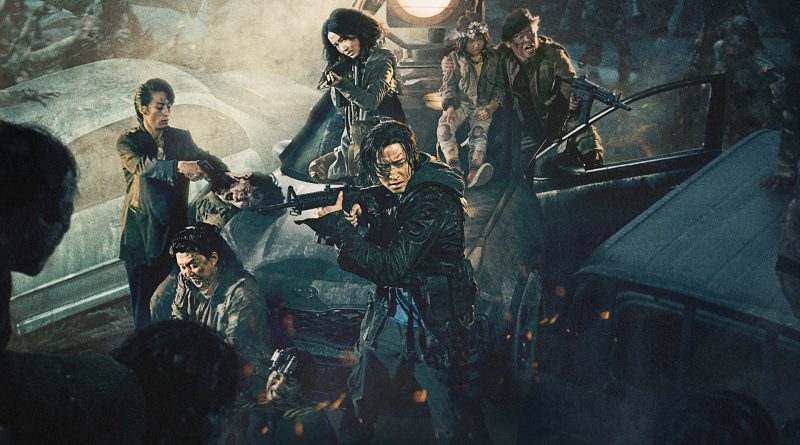 There are flashes of style in this zombie film sequel, but it ultimately feels like ‘just another zombie film’. Which is disappointing, given how original Train to Busan was.

An ex-soldier Jung (Gang) and his brother-in-law, survivors from the zombie apocalypse that has destroyed South Korea, are living dangerously in Hong Kong.

A local gangster has a proposition that will turn them into millionaires: return to Seoul and find 20 million dollars in the back of a lorry that is stranded on one of the bridges out of the city.

Fast-moving, swarming zombies prove to be only one of our heroes’ problems. Seoul is partly ruled by a heavily armed militia that captures zombies and civilians and stages fights between them. The militia’s two leaders are at loggerheads and want to get their hands on the loot too.

As does a small family unit splinter group that is prepared to help Jung.

The main problems here are slow pacing in the middle of the film and the video-game style CGI visuals.

The slow pacing – especially around Jung’s stay with the mum, her two daughters and gramps – is a serious mistake. I assume it was supposed to bring pathos to proceedings and thereby a wider audience for the film.

The price of failure may well be more bums on seats, or it may not. Either way the pathos doesn’t work, neither here nor in the over-emotional denouement. It is just a bit boring.

The dreadful CGI may also be intentional – again, to bring the film to the attention of gamers. Or it may not. Either way, it looks cheap compared to the “real world” look of Train to Busan.

On the plus side, there are some satisfying impacts of heavily armoured vehicles into fleshy mounds of digital zombies; and the zombie games in a deserted shopping mall is a nice idea.

Train to Busan Presents: Peninsula is available online from 23 November and on Blu-ray and DVD on 30 November 2020.