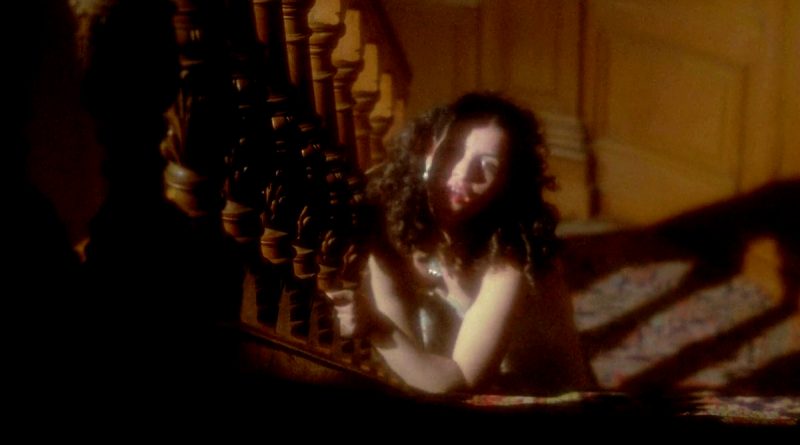 One of the most visually exciting costume dramas you’ll ever see, this ‘arthouse horror’ by controversial director Walerian Borowczyk is essential viewing if you want to experience the stranger side of cinema.

A series of high-society figures turn up at the London residence of Dr. Henry Jekyll (Kier) to celebrate his engagement to Ms. Fanny Osbourne (Pierro). But, Jekyll’s experiments in ‘transcendental medicine’ have created a psychopathic Mr Edward Hyde (Zalcberg – very scary looking, with shaved eyebrows and cropped hair) as his double/nemesis, and the guests are soon fighting for their lives as the monster roams the house, violating and killing at will.

This plot outline makes the film sound utterly genre oriented, but the plot is just a hook on which to fix a series of unique and beguiling images which use harsh lighting as it dissipates across oak-panelled hazy interiors, surrounding and transfiguring characters as they stand in doorways; reflective surfaces and mirrors; ‘still lifes’ of objects on table tops and some mildly eroticised images of women too. There are as many hazy, dreamlike images of environments as there are diamond-cut, focused images of objects. There is also quite a lot of comedy, principally due to Patrick Magee’s wonderful turn as an extremely lecherous and pompous colonel.

Borowczyk was obviously a perfectionist when it came to sets. He designed the décor for the sets and would arrange objects in them with obsessive rigour, like a Tarkovsky of Exploitation Cinema. There are several narrative shots where the characters and their actions are pushed to the edges of the frame so that viewers can appreciate the play of light over the ‘room’ as a whole, as it falls and shines on objects and surfaces.

To a certain extent, Borowczyk’s version of the Jekyll and Hyde story foregrounds the female gaze, via the perspective of Jekyll’s fiancé, Fanny Osbourne – a character who isn’t in Robert Louis Stevenson’s original tale; although obsessives will note that Fanny Osbourne was the name of Stevenson’s own wife, who apparently threw a more lurid first version of the Jekyll and Hyde tale on the fire.

There are several striking scenes in which Fanny’s experience is foregrounded, most powerfully the scene when she watches her fiancé take the bath that turns him into Mr. Hyde. You can’t really call these ‘proto-feminist’ moments as they remain instances of a woman imitating male behavior, but they are wonderful to watch all the same.

I’ve always found early Borowczyk films – coming out of the Polish animation scene of the 50s and 60s – too niche, craft-oriented, claustrophobic. I think he hit his stride with the sexier films of the 70s, inhabiting as they do an uneasy territory between arthouse and grindhouse. But that description is unfair: that is how his films were distributed but they are much better than that sounds (although he went on to make Emmanuelle 5 …).

The signature concept in Borowczyk’s cinema of this period is the beautiful shot that manages to fetishize everything – both objects and female actors. But ‘fetishize’ in this sense means ‘transfigure’ more than turn into the toned, ritualised body that’s the currency in pornography. His films are more like von Sternberg’s beautiful transatlantic posturings than Tinto Brass’, let alone anything that’s ever come out of the San Fernando Valley. Even blatantly softcore shots here, as when the Colonel’s daughter drapes herself over a treadle sewing machine, tease through the use of lacy undergarments rather than going full gyno-exam.

The odd, dreamlike nature of the film is accentuated by Bernard Parmegiani’s haunting electro-acoustic score.

The disc features a restored high definition transfer – which will be a revelation to anyone who suffered through the print that’s been doing the rounds the last few years – and both French and English versions of the film, the latter featuring Patrick Magee’s own voice. It also features:

The Strange Case of Dr Jekyll and Miss Osbourne was one of the notable lacunae from Arrow Video’s 2014 Walerian Borowczyk retrospective collection – which met with unanimous critical acclaim. This film is the perfect introduction to the director’s work, so sit back and enjoy venturing into his irredeemably strange world.

The Strange Case of Dr Jekyll and Miss Osbourne is out on dual-format Blu-ray and DVD from 18 May 2015.