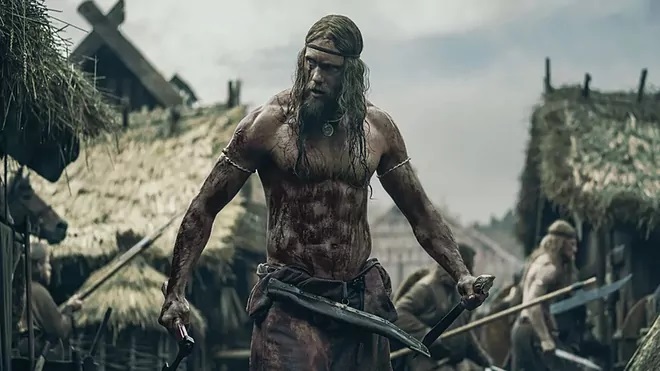 This Viking tale is not for the faint hearted.  It is loaded with violence, living up to the historic Viking reputation, plus a bit of sex and a lot of mysticism.   And it is very impressive.

The central character is Amleth (Alexander Skarsgård).   As a boy, played by a beautiful child called Oscar Novak, he witnesses his father the king Aurvandil War-Raven (Ethan Hawke) being brutally murdered by his brother Fjölnir (Claes Bang).   Fjölnir then takes over the kingdom and Aurvandil’s wife Gudrún, Amleth’s mother (Nicole Kidman), while young Amleth flees for his life.

We next see him as an adult, presumably back to avenge his father and reclaim the kingdom.  No, it’s not quite as simple as that.  Reminded by the Seeress (Björk) of the vow he made as a child to avenge his father, save his mother and kill his uncle, he tracks down his uncle’s tribe, who have now moved on and deliberately joins a group of Fjölnir’s slaves, where he meets sorceress and fellow slave Olga of the Birch Forest (Anya Taylor-Joy), who becomes his lover.   And the plot gets more involved from then on.

What director Robert Eggers has done magnificently is create a complex albeit violent and uncivilised society, full of superstition, magic and ritual, with a lot of animal imagery and a throbbing, atmospheric, drum led soundtrack, which makes the cinema vibrate.

There is a powerful scene of animal magic early in the film when the tribal witch doctor, known as Heimir the Fool (Willem Dafoe) conducts a ritual with young Amleth and his father where they become wolves – a useful attribute later for Amleth in his quest.

After her husband’s murder Nicole Kidman as Gudrún is very much in the background.  Until we come to one of the most dramatic scenes in the film, when Amleth confronts his mother about her disloyalty to his father and we realise this is analogous with the bedroom scene between Hamlet and his mother in Shakespeare’s play, although somewhat different in content.  And that in some ways many of the themes in this tale are the bard turned Viking.  Kidman even gets to channel the ruthlessness and cruelty of Goneril soon after.

Bang creates a powerful figure as the usurper Fjölnir, whose main concern is the dynasty he hopes to create via his sons.   The family tree is at some points seen literally, making the point that it is not so much survival in this life that matters as passing on one’s genes into the future though your sons.

Unlike the comic book capers of super hero movies or previous glossy Hollywood versions of Viking land, Eggers’ carefully researched film has the texture of raw history and primal legend come to life.   And although written and directed by a contemporary American, it has the feel of ancient Nordic authenticity.