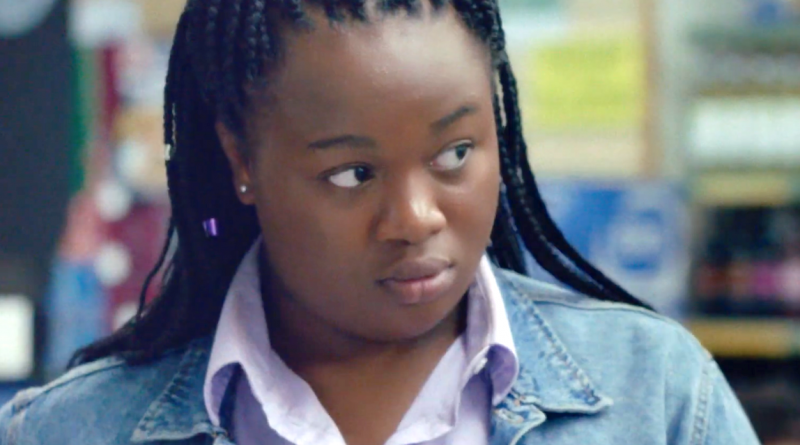 15 year old Rocks (Bukky Bakray) is a sociable East End teenager, who enjoys her school and her diverse circle of friends, including her bestie Sumaya (Kosar Ali).

She also loves her cheeky little brother, 7 year old Emmanuel (D’angelou Osei Kissiedu).  The sibling’s world is turned upside down however when their widowed mother Funke (Layo-Christina Akinlude), who suffers from mental health issues, walks out one day just leaving a note and an envelope with some cash.  It is not the first time Funke has disappeared and Rocks knows from experience that if the social services find out she and her brother have been left to fend for themselves, they will likely be separated.   So she turns to her friends to help her and Emmanuel.

Despite the downbeat nature of the central premise, the film is suffused with the joy and energy of its young protagonist and her gang, which is arguably down to the way the film was developed.   Director Sara Gavron and the film’s writers Theresa Ikoko and Claire Wilson started the project not with a finished script but with an idea.  They then went into various inner city girls’ schools, where they set up a series of improvisation workshops from which emerged the characters and indeed the actors.   Bakray and Kissiedu, who came from different schools and had never met before, became great friends during this process – a friendship which then translated into their characters in the final film.

It’s a process which gives the film an almost documentary feel at times, capturing as it does the reality of teenage interaction. The story is somewhat episodic and meandering at times, in that some scenes feel as though they have been left in because they were so appealing in themselves rather than because they are relevant to the central journey.   For example, a sequence where Rocks, having fallen out with Sumaya, joins a new set of friends, who break into a posh flat to sample its joys – and its booze.

However the sheer exuberance and expressiveness of the characters holds our attention, particularly Rocks herself and her delightful little brother.  The film is also a welcome and original celebration of teenage friendship, challenges and aspirations in today’s culturally diverse society.