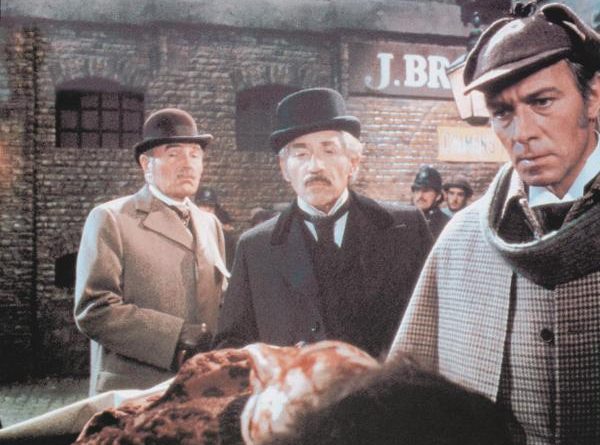 Sherlock Holmes solves the Jack the Ripper murders in this profoundly watchable film, grounded in spot-on performances by screen legends Plummer and Mason.

Three Whitechapel shopworkers call on Sherlock Holmes (Plummer) to help put a stop to the prostitute murders in the East End. With Dr Watson (Mason) in tow, the world’s most famous detective investigates and soon uncovers a conspiracy that reaches from the highest to the lowest strata of society.

This Jack the Ripper conspiracy narrative is well-known now and widely derided, but that allows us to savour the performances that make sense of it here. Plummer’s Holmes is unusually compassionate and socially engaged: he even cries at one point. Mason’s Watson is more conservative: it’s his friendship for Holmes that is his trigger for setting wrongs right.

Credit must go to screenwriter John Hopkins (Smiley’s People, Thunderball) for bringing this socialised aspect of Holmes into play; and to Plummer (and Mason) for making It credible.

The film doesn’t feel like it is two hours long; it could suffer being longer gladly. As it is, the sub-plot involving political radicals feels truncated and the story runs in a very linear way that threatens to plod.

There was a missed opportunity here, as we find out that Holmes has been investigating off-camera on one occasion at least. Clark and writer John Hopkins chose to focus on the all-star cast (who are allowed to do their thing albeit with parsimonious aplomb) and key scenes that see the famous names interacting, rather than developing the story.

I guess that makes commercial sense, although, if anything, the story could do with a mini-series telling. But that’s time machine stuff … fast forward to 1988’s Jack the Ripper starring Michael Caine (as a policeman, not as Holmes).

The extras here an audio commentary with crime fiction historian Barry Forshaw and film journalist and author Kim Newman; and a separate interview with Kim Newman.

The Newman interview is especially good: it puts the film and Plummer’s performance in the context of other actors’ takes on the part, especially the more modern presentations of Holmes as a “pathological” character.

Murder by Decree is out on digital download, DVD and Blu-ray on 28 June 2021.