Memoria, the latest film from Palme d’Or prize-winning director Apichatpong Weerasethakul, is a fresh and worthy instalment in the rich history of sensory, slow cinema. The film is a remarkable sonic journey that doesn’t make conventional sense as much as it calls us to a deeper understanding of the senses.

Tilda Swinton stars as Jessica, a British botanist, who visits her sister in Bogota, Colombia. During the night, Jessica is awoken by a loud bang. The remainder of the film is lived in response to this sound. Jessica is fearful of it, attempts to recreate and rationalise it, before appearing to find some form of peace in the unknowing. The film is not about explanations, it is about the ability for events to alter us in ways untranslatable.

Weerasethakul has a unique ability to uncover the complexity of human connection and disconnection, both between people and with the world. The film opens with an interruption—a visit—a jarring, thudding sound that lifts Jessica out of bed and drags her into the depths of delusion. The accompanying car alarms imply an intruder, even an extra-terrestrial, but nothing is made clear. We are only offered footholds and handholds. Swinton is blank faced, caught between bewilderment and being beholden.

The film meditates on human inventions, our physical and mental constructions. These tools are helpful but imperfect. Even language, the film posits, is a network of rickety bridges incapable of communicating what we really mean or translating what we really experience.

The best scene in the film takes place in the sound studio. Jessica, with the help of sound engineer Herman, is searching for a sound that replicates the loud bang. The trial-and-error conversation is a superb demonstration of the relationship between the objective and the subjective. Jessica has witnessed something, at least that much is true, but she is unable to capture it in language—she doesn’t have the tools. She pushes against the limits of communicating sensory information. “It was like a big ball of concrete that fell into a metal well”, she says. Jessica twitches and tremors; the sound needs to be deeper. Her and Herman’s reactions are contrasted: she is remembering an event; he is replicating a sound. There is distance.

Memoria is unafraid of slowing, seating and silence. Jessica is often still, the background moving more than she does, the world continuing as it passes her by. Weerasethakul succeeds in creating timelessness in different places. He cuts with images and sounds, both seamlessly and disruptively as intended. The second half of the film stretches out before us despite only utilising a couple of settings. There is so much space in the static images. As Jessica, herself, moves away from tools towards something more transcendent, we can feel the silent vibrations of her body.

Weerasethakul is excellent at portraying competing worldviews. Literature on viruses and bacteria is frequent in the film, while stories of cursed dogs and holes driven into heads to release evil spirits are not discarded simply as superstition. He isn’t a didactic filmmaker, his characters don’t seem interested in debate per se, but there is always a nearness to revelation: eyes are open, hands are open, the land and skies are close-by. There is good in the world and there is good out of the world, and there is a lot in-between. Memoria revels in the in-between. 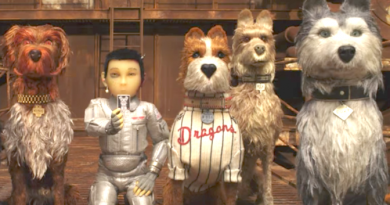