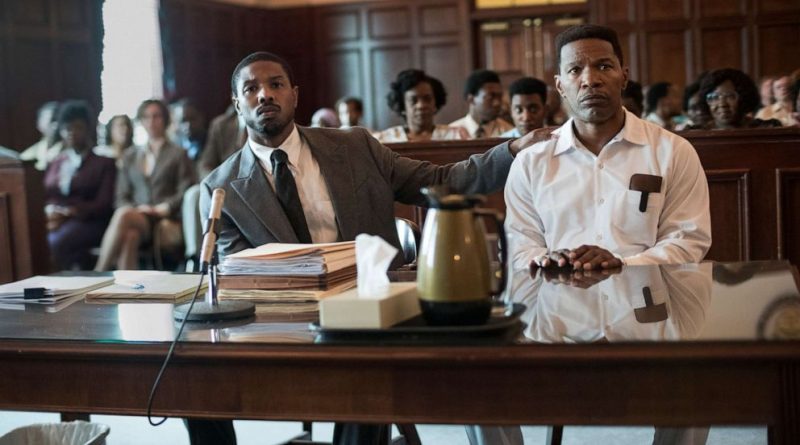 [box type=”info”] Fans can own “Just Mercy” via purchase from digital retailers now. The film will be available on DVD on 25th May.[/box]

Just Mercy is based on the story of real life black lawyer Bryan Stephenson (Michael B. Jordan). When Bryan graduates from Harvard in 1988, he rejects the cushy job offers and relocates to Alabama to fight for justice and the underdog. His clients are largely though not exclusively black. And they are all poor and victims of injustice.

The story at first unfolds in a predictably disturbing way, reminiscent of the racism we saw Sydney Poitier being subject to in In the Heat of the Night which was set over twenty years earlier.  Bryan is a black man driving a smart car and inevitably in 80s Alabama he is stopped by the police for no reason other than his colour and handled roughly at gun point.

This film isn’t just about racism though but injustice and capital punishment.  We realise even more what Bryan is up against, when he witnesses the electrocution of a client he has failed to save, while all the other inmates on Death Row, many of whom have been there for years, are drumming on their cell doors in acknowledgement of the condemned man.

The main meat of the film is Bryan’s campaign to save Walter McMillan (Jamie Foxx), another inhabitant of Death Row, who has been condemned on very dodgy evidence for the murder of an 18-year-old girl.  It is a fight which takes years.  Both actors give very strong performances in a story which has you almost screaming at the blatant injustice that is revealed.

Rafe Spall has a couple of effective scenes as the ruthless district attorney determined to send Walter to the electric chair though Brie Larsen as Bryan’s sympathetic colleague has little to do but trot round after him.

The statistics regarding capital punishment figures that we read at the end of the film make for chilling reading. This is ultimately a powerful indictment not only of racism but of institutionalised injustice and of capital punishment in particular.