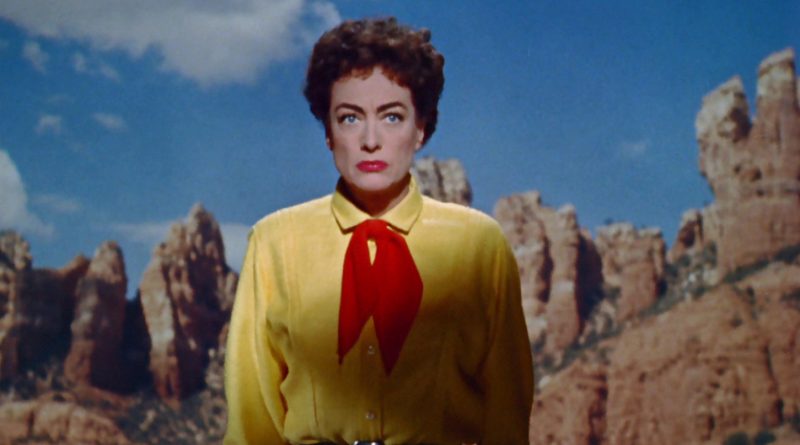 The classic, original ‘weird’ western gets a 4K restoration and comes across better than ever.

A man without a gun, by the name of Johnny Guitar (Hayden), rolls into town and looks up old flame Vienna (Crawford), who owns the local saloon-cum-casino.

Vienna’s current beau is the Dancing Kid (Brady), who holds up stage coaches and banks when he isn’t looking pretty at Vienna’s side.

Emma (McCambridge), the leader of the local lynch mob, has a soft spot for the Dancing Kid. The Kid’s rejection of Emma pushes her into doing something terminal about Vienna.

Nicholas Ray’s western looks more clever and more prescient than ever. It is still startling to see a western from the 1950s where it is the antagonism between the female leads that drives the plot; where it’s the women who shoot it out (figuratively and literally) in the key scenes; and where the men are reduced to posturing, or weary one-liners that highlight their own redundancy. Note those unheroic names: Johnny Guitar and Dancing Kid.

This is a western that rings the changes brought by film noir: female characters drive the plot and the forces ranged against Vienna and Johnny – Emma’s black-clad posse – are cruel, relentless and implacable.

Formally, too, Johnny Guitar remains odd. It is filmed, especially the first half, in a staccato manner, with lots of cuts to frozen responses on faces. There’s little camera movement and absolutely none of the epic feel you get from John Ford or Anthony Mann westerns of the same era.

The oddness continues in the dialogue: when they Vienna often speaks like the male lead in a western and Johnny sounds like a female character craving affection.

If you think shock-faced gargoyle Crawford could not be upstaged and out-acted, you haven’t seen McCambridge’s vicious rodent turn here: the fact that McCambridge went on to voice the demon in The Exorcist comes as no surprise.

One thing I hadn’t picked up on before: that great romantic theme by Victor Young. It’s sung by Peggy Lee over the end credits, but crops up in instrumental form throughout the movie. It does a good job of twanging the heart strings – and adds a note of much-needed emotional sincerity to proceedings.