Tom Cruise stars again as Jack Reacher in this action thriller based on another of Lee Child’s books featuring the tough and isolated hero of that name.

Reacher is no longer in charge of the elite military unit that was his former command (“Ex Major”, he insists to those who continue to use his title).  He is though still in touch with former colleague Major Susan Turner (Smulder).   And when Turner is framed for espionage, the two find themselves on the run in an effort to clear her name.  On their tail are not only the military police but some very brutal assassin types led by The Hunter (Patrick Heusinger)

This is an action movie which does exactly what it says on the tin.  Plenty of well filmed fighting, mostly hand to hand fist fights and shoot outs and, while there is plenty of fast car driving, the film avoids that staple cliché, the car chase.  A big set piece, in which our heroes are being pursued through the colourful crowds of the New Orleans Halloween carnival, is particularly inventive.   And the resolution of the puzzle as to what is the nature of the villainy that Reacher and Turner ultimately uncover is satisfyingly unexpected.

The film is also unusual for an action movie in that it features a number of strong female characters, who are right in the thick of it.  Smulders herself, with whom I might add there is no suggestion of romance with Reacher apart from a mild flirtation; Ninja N. Devoe as a sympathetic MP sergeant who helps them and most notably the talented Danika Yarosh as Sam, a teenage girl who may or may not be Reacher’s daughter.   Despite this the film would not pass the Bechdel test – the one where women in a film have to talk to each other about something other than a man.  In the only one to one conversation Turner and Sam have with each other, what are they talking about?   Reacher!

The only well known “name” is the cast, certainly for the UK, is Cruise himself but other notable performances include Robert Knepper as a general, who is possibly up to no good and Aldis Hodge as an Military Police colleague who comes over to our hero’s  side.

It is sometimes a bit tricky to sort out finer details of the plot amongst all the fighting and other mayhem, but that is not really the point.   This is an action movie for fans of action movies and as such, it hits the spot. 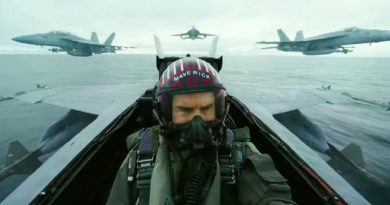 American Made (12A) | Close-Up Film Review