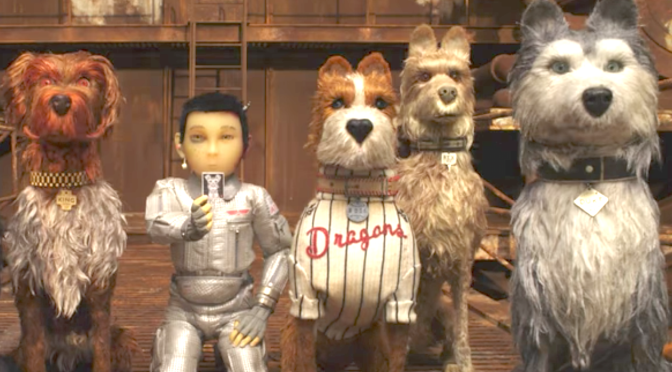 This second animation film from the versatile Wes Anderson, building on his experience when making “The Fantastic Mr Fox”, is much more ambitious.  It is very stylish and pleasing to the eye, inspired visually by Japanese cinematic and pop culture tradition and developing the art of stop motion puppet animation in new, creative ways, even incorporating traditional hand drawn animation for certain sequences.   It is above all though a good story well told.

12 year old Atari Kobayashi (Koyu Rankin) is the ward of Mayor Kobayashi (Kunichi Nomura), the corrupt ruler of Megasaki City.  With the city’s dog population expanding to epic proportions, Kobayashi, who bears an interesting physical resemblance to Stalin, issues a decree exiling all dogs, both stray and domestic, to Trash Island, on the grounds that dog flu is threatening to spread into the human population.  The exiles include Atari’s beloved body guard dog Spots (Liev Schreiber).   So plucky young Atari flies off alone in a borrowed miniature Junior-Turbo Prop to Trash Island to find his lifelong friend, where he enlists the help of what is now a community of canine exiles.

They include the ballsy and scruffy stray Chief (Bryan Cranston);  Rex (Edward Norton), the leader of the pack: and King (Bob Balaban), who once enjoyed a career in the media spotlight as spokesdog for Doggy Chop dog food.  Chief emerges as the hero of the story.   He has a sleek and sexy love interest in former showdog Nutmeg (Scarlett Johansson).  Their witty, jousting courtship is reminiscent of Bogart and Bacall or Tracey and Hepburn.   Also helping Atari is his quest is the brandy carrying St Bernard soothsayer Jupiter (F. Murray Abraham) and his Oracle (Tilda Swinton), the only one who can understand and interpret the reports we see on the television.  Plus a human animal rights campaigner Tracy Walker (Greta Gerwig), who also comes to their aid.

The human characters, who apart from Tracy are Japanese, are voiced by Japanese actors speaking in their own language, while the dogs are voiced by English speaking actors.  Avoiding subtitles Anderson uses a variety of ingenious and amusing methods to enable us to follow the Japanese dialogue.

Although an animated film featuring animals, this is on a very different level from Disney style movies such as “Lady and the Tramp”.   It is more animation for adults and older children.  Much of the story is told in flashback, so is quite complex in structure and while it is both charming and funny, the wit too is often quite adult and the themes are pretty sophisticated and often disturbing.  Trash Island itself is a disgusting rubbish dump where you can almost smell the stink and is a reminder of the way we are despoiling the planet, while the poignancy of well bred and pampered house pet dogs suddenly finding themselves starving in what is effectively a canine concentration camp raises uncomfortable memories of how we sometimes treat our fellow human beings.

The film is fun and frothy is places, moving in others, beautifully made – much of the animation was created in East London at 3 Mills Studios, just north of our own Isle of Dogs – and always absorbing. 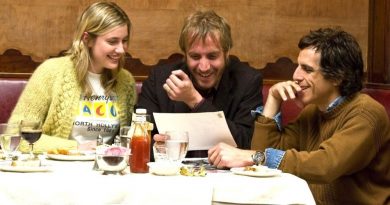 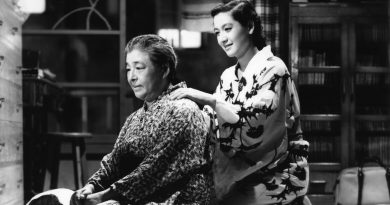