In the Heart of the Sea tells the story of Nantucket Whaling ship The Essex which was allegedly sunk by a Sperm Whale in 1820 and is said to have provided the inspiration for Herman Melville’s classic Moby Dick. Surrounding this is the (probably) fictionalised framing device of a young Melville (Whishaw) meeting one of the survivors of The Essex (Gleeson) to gain inspiration for what will become his masterpiece.

Chris Hemsworth plays Owen Chase, a family man of farming stock who has been promised captaincy of a ship. However it soon transpires that the captaincy of The Essex has been given to George Pollard (Benjamin Walker) a man of little experience but with a well-known family name.

After being forced into taking on the role of first mate, the two are soon butting heads as The Essex sets sail with its thinly sketched crew including Cillian Murphy and Tom Holland to hunt the whales that will provide the oil to keep the home fires burning and the fat cats rich. Sound familiar?

Chase is quickly established as a man of action and a man of the people, with Pollard up tight and unsure. This will not be plain sailing. No sooner have we left the shore when we are thrown into our first crisis (averted by Chase) and then a storm made worse by Pollard. Then come the whales and the destruction of their ship by a gigantic ‘demon’. In the Heart of the Sea is a film of two halves, the first a rollicking sea adventure and the second a fight for survival after The Essex is destroyed. It’s the second half that really falters bringing nothing new to the table after Cast Away and the recent Unbroken.

Hemsworth is as good looking and heroic as usual though his accent wavers somewhat throughout and his character’s choices in the second half of the film seem a little odd. Walker does well in a thankless role as Pollard and the rest of the crew barely get a look in, Tom Holland is the ‘green horn’ on his first whaling trip and other actors such as Cillian Murphy are simply wasted in massively underwritten roles.

Brendan Gleeson and Ben Whishaw fare much better as the last remaining survivor of The Essex and Herman Melville respectively. Whilst the framing device is initially annoying and interrupts the narrative flow, it soon settles into its own and the scenes between the two are some of the warmest and grounded in a reality.

The biggest issue with the film is the whaling scenes, as in this day and age hunting these amazing mammals is just not acceptable and so it makes the whole thing uncomfortable and very difficult to watch. The film leaves a sour taste behind and firmly places us on the side of the whales. It’s very difficult to have any sympathy for Chase, Pollard and their crew in these circumstances.

Veteran director Ron Howard handles the action well and is a very accomplished filmmaker, but whilst he has made some excellent films (Apollo 13, Rush) it’s hard to identify a ‘Ron Howard film’ and there is little here that changes that or stands out. There are some impressive visual effects such as the first storm and whale attack and just as he did with the racing in Rush, here Howard manages to place us in the heart of the action and even on the side of an impressive looking whale.

In The Heart of The Sea is well made and enjoyable, but unlike the ‘demon’ Whale, unremarkable. The film ends with a lovely knowing aside hugely relevant to these troubled times of ours and there is a very important message about wildlife and our planet, mess with nature and it will mess with you. Tenfold. 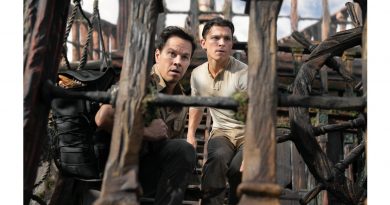