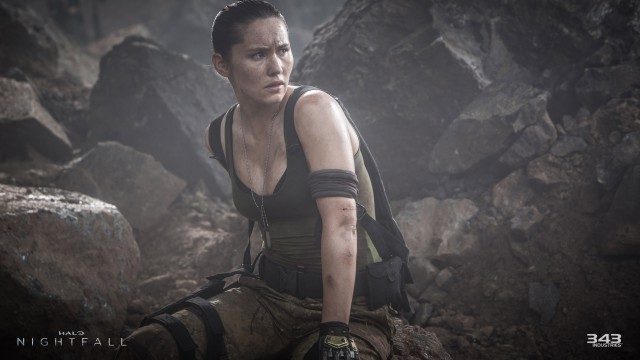 It’s hardly surprisingly that Microsoft Studios (the publishers of the hugely successful ‘Halo’ games) and 343 Industries (the developers) have put so much effort into the franchise, because Halo’s science fiction universe has a great deal to offer.

Big guns, bigger enemies, an iconic (and visually distinctive) set of antagonists, reams of mythology, endless sumptuous backdrops and an established poster boy (Master Chief, the green armoured super-soldier adorning the games’ cover art) . . . the list goes on. It’s strange, then, that Halo: Nightfall chooses to ignore pretty much all of that.

Billed as a bridge between the franchise’s most recent instalment, ‘Halo 4’, and the upcoming ‘Halo 5: Guardians’, Nightfall introduces us to a new hero, Agent Locke. His job: to lead a small team on a treacherous mission to destroy the universe’s sole deposit of a deadly new substance and ensure it never falls into the wrong hands.

We’ll start with Locke, if I may. 343 have promised us Locke for ‘Halo 5’, so when we’re told that only two of our Nightfall team will get out alive . . . well, the tension barely registers.

And the rest of the movie’s no better. By crafting a singular, self-contained narrative, not only have they turned away from the games’ well-established foundations, but they’ve reduced the stakes infinitely. Truth be told, Nightfall feels like cheap extended universe work, despite the $10 million price tag. Sure they chuck in references to the Covenant and the Forerunners and the props look the real deal, but this isn’t Halo.

They’ve taken a living, breathing sci-fi universe and boiled it down to a B-movie monster picture (did I mention the killer worms?). They’ve given up on the mysterious, brooding lead (Master Chief) and given us a bunch of two-dimensional marines. It just feels so generic: Pitch Black’s night vs. day stuff, Aliens’ marines and Edge of Tomorrow’s shape-shifting foe . . . the list goes on.

Even Halo’s iconic, and rather brilliant, music is ditched in favour of a totally unforgettable action score. The performances are poor (is that David Morrissey’s long-lost half-cousin?) and the dialogue worse (‘I remember my childhood on the north coast of England’ . . . what does that even mean?).

Halo is a franchise notable for its use of bright colours and bold visuals – the aliens fly purple spaceships, for goodness sake! – yet, for some reason, Nightfall abandons us in the greyest location imaginable. But, at least the colour palette matches the marines’ personalities: can somebody please let the creators know that dramatic doesn’t always have to mean humourless!

I’m unsure what was lost in the transition from serialised five-part TV show to feature-length movie, but Halo: Nightfall is Halo in name only. Give up on this rubbish and just watch the far-superior Halo 4: Forward Unto Dawn; it’s leagues ahead.

The extras on offer here are the usual bunch of featurettes found on the majority of Home Entertainment releases. Puff pieces with cast and crew discussing their great story, their great co-stars, the great location (we get it, everyone is filming in Iceland right now), the great Mike Colter playing the great character Agent Locke.

What is apparent from the bite-sized featurettes is the passion and excitement for the material put across by all involved; you can’t fault it. It’s just a little light on real insight, like with most special features on most DVDs and Blu-rays these days. Microsoft have made a disclaimer saying the views and opinions expressed herein are those of the individual, and not representative of Microsoft; although I don’t think there’s a single person who believes anyone involved is going to take the opportunity to bash the studio giving them work.

Also included are a variety of un-absorbing webisodes designed to build the world of Nightfall and obviously used to build hype in the run-up to its release. Well acted (to an extent) and slick, they feel like a time-wasting diversion rather than a worthy addition to the centrepiece.

Halo: Nightfall is out on DVD, Blu-ray and digital download on 16 March.      Buy from Amazon