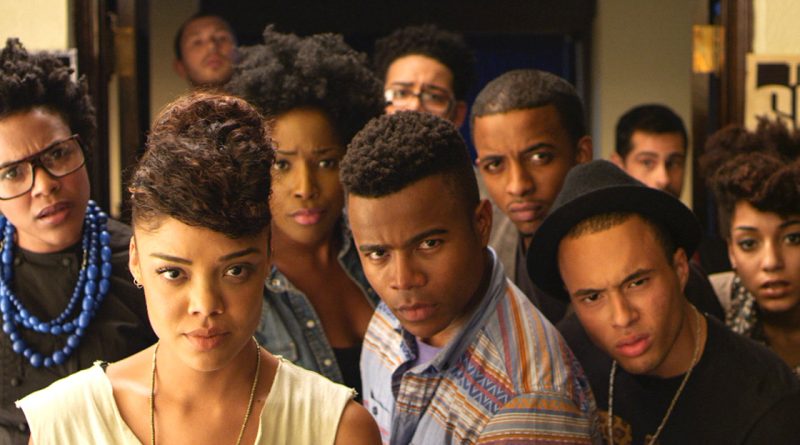 What is it to be ‘black’? Is there still a culture of ‘Black-Face’ in 21st century America? Can Black people be racist? Are we still in the midst of a race war in contemporary society? Is there still a culture of ‘white entitlement’? Do all black people look the same? Is Gremlins (Dante, 1984) actually about white suburbia’s fear of black culture?

These are just some of the many questions scaled within Justin Simien’s witty Dear White People whose title references a fictional radio programme of the same name largely featured within the film. Its host is media student Samantha ‘Sam’ White (Tessa Thompson – Selma), who throughout spearheads the conversation about what it means to be black in the age of Obama; an age that for some remains dominated by white notions of class, beauty ideals and misconceptions about the black race.

Written, directed and produced by Simien who was inspired by real-life recurring instances of racism taking place between 2010-13 at various universities in America (Florida, Mississippi, San Diego etc.), the film follows a group of black students at the fictional Ivy League college Winchester University as they navigate a predominantly white college and attempt to stop the proposed reform of the long-standing predominantly black Parker House. It’s an ownership issue that descends into a full-blown campus war that grabs nationwide headlines. The winner of the 2014 Sundance Film Festival Award for Breakthrough Talent, the film’s multiple threads draw together when each character must pick a side.

Simien’s provocative film plays out as an exploration of identity in “post-racial” America. Inevitably for some, Dear White People will come off as over-the-top and unnecessary; to others it may be seen as relevant and thought-provoking, and some may see it as just what is needed not only within the current slate of films that are being released, but also necessary if things are really going to change. Such a reaction comes from the film’s material deeply affecting members of the audience on a personal level. The film is split into seven chapters (campus arrivals, house elections, show and tell, game night, change of plans, recalls and retractions and epilogue) that not only dissect a handful of interwoven stories, but provide a strict timeline for the escalation of events.

As well as Tessa Thompson, the cast includes Everybody Hates Chris star Tyler James Williams as loner and outcast Lionel Higgins, Brandon Bell as the head of house ‘legacy kid’ and son of the university’s dean (Dennis Haysbert) Troy Fairbanks, Teyonah Parris as Coco ‘Colandrea’ Connors, the fame hungry traitor-to-the-race who will go to any length to carve out a career as a reality TV star and Kyle Gallner as Kurt, the obnoxious, privileged son of the university’s president. As you can see, the film possesses its fair share of stereotypes.

Essentially Dear White People is a provocative, sharp-tongued satire that pulls no punches in addressing many of the classic faux pas regarding black culture. In particular, Dear White People makes direct reference to the worldwide media industry as a whole, which is perceived as continually perpetuating negative connotations about black people/culture as conflict is seen as a commodity. This is specifically referenced in the film’s opening which montages a collection of audio clips from various well-known television shows that some would argue are the main perpetrators in belittling black culture; for example Maury or The Housewives of Atlanta, integrated with examples of popular rap music with very derogatory language, all interplayed with garish multi-colored credits.

With a script that is chucklesome and more than capable of eliciting feverish outrage from many members of the audiences, where Dear White People really holds itself together is in how it manages to interplay its very important political viewpoint with a number of very funny gags. In the case of Dear White People it seems that humour is used to bisect the tension built up by many of the film’s hard-hitting statements, and this is one great strength of the film. As Simien’s film goes on to talk about political correctness, affirmative action, the use of the n-word and the African diaspora in conjunction with black attendance at Tyler Perry movies (at his long-standing Madea movies), distaste at white people asking to touch their hair or at their un-uniform dancing, the black perspective is well covered throughout the film’s 103 minutes.

Simien and Serrano make many grand statements throughout the film, from the opinion that the “lynch mob is still here, it has just rebranded itself [as the Republican party]”  to more serious reflections that black culture in a commodity only to be bought and sold; about homogenised images of black people functioning as a means of consumption targeted at white audiences by white marketeers; or the idea that black stereotypes are wrapped in religious dogma as well as the many rules used by black people in order to survive. But these statements are presented near more comic perceptions, such as the argument concerning the true origins of Dante’s 1984 Gremlins (on the basis that the Gremlins talk in slang, are addicted to fried chicken and freak out when you get their hair wet). Such witty quips really help to pull the film together, suggesting that Simien and Serrano aren’t afraid to get their hands dirty and make us laugh at the same time.

Bolstering an already political film is the pitch perfect performance of its ensemble cast who throughout act with conviction and empathy within the film’s unfolding situation. This is especially the case when looking at Thompson’s leading role as Sam, who is the film’s poster girl for black-ness despite being mixed-raced, being described as the pissed off baby of Spike Lee and Oprah.

As Dear White People explores the various relationships between its cast of characters in the days leading up to the ‘incident’ (an outrageous, ill-conceived Halloween party with the tagline “unleash your inner Negro”), it “turns out that the only thing Americans love in their reality TV more than ignorant black people is crazy racist white folk”. And if Dear White People is not this statement’s clearest example of this then it is clear you weren’t watching Dear White People.

The film signs off with the opinion that “they spend millions of pound on their lips, tans, asses and Jay-Z tickets to be us”; and that from history it is clear that “it wasn’t speeches that turned the tide for civil rights. It was the anarchists willing to provoke the police and get sprayed by hoses, anything that would cause a scene and make a press”. But the biggest question is: have we learned anything from all this? Can there be harmony?